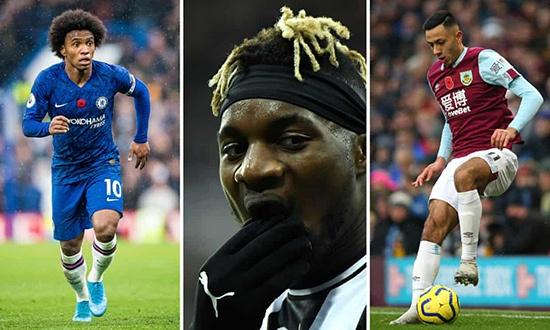 1) Mahrez has failed to convince Guardiola of his worth

Riyad Mahrez impressed only in spells during his first season at Manchester City but, with Leroy Sané felled by a cruciate injury in August’s Community Shield victory, the onus was on the £60m man to step up. An imperious performance at West Ham on the opening day of the season suggested he would do exactly that, yet he has started only four league games since – two of those being defeats – and with his side desperate for goals in a critical game at Anfield he was not called on at all. Mahrez remains a magical player on his day but the suspicion remains that he is a player who reflects his team’s performance rather than dictates it. City broke the bank to sign Mahrez from Leicester. With their defence a shambles, it looks in hindsight like a woeful misjudgment. Alex Hess

2) Emery leaving his Arsenal side without direction

Upon trying to leave the King Power Stadium on Saturday night, a number of Arsenal players took a wrong turn out of their dressing room and were pointed in the right direction by waiting media. Anyone seeking metaphors for their current position could fill their boots and it is hard to see, on present evidence, how Unai Emery can put his team back on the straight and narrow. There is a desire around the club to give him the rest of this season and it might be a godsend that their next two games, against Southampton and Norwich, could hardly be better chances to stop the rot. Arsenal did look more coherent in spells against Leicester and if they continue to improve then weaker opponents should be disposed with. The problem is that, stylistically and strategically, they still looked far short of what Brendan Rodgers has achieved in well under a year. Emery will probably cling on, but would he simply be papering over the cracks? Nick Ames

Harry Maguire wore the Manchester United armband against Brighton – the first time he has been given the honour ahead of David de Gea. Ashley Young was suspended, but at 34 the captain is no long-term leader of Ole Gunnar Solskjær’s side. Instead the manager hinted it could be Maguire. “Harry is captain material, so is David,” he said. “But Harry’s come in and been excellent in the dressing room and on the pitch. He can become a long‑term captain.” Maguire was a little vulnerable here, one first-half mistake almost leading to Brighton pulling one back with United 2-0 up. Yet he shook this off and remained intent on using his touch and composure to play the team out of trouble, while also offering a constant threat from the high ball. More than De Gea, the England international does seem the next natural captain. Jamie Jackson

Willian has divided opinion since joining Chelsea in 2013 but Frank Lampard will not hear a bad word against him. They were teammates during the Brazilian’s first season in England and since returning to Stamford Bridge in the summer, Lampard has made a point of getting the smile back on the winger’s face. Chelsea’s manager loves Willian’s workrate – he says it shows Christian Pulisic and Callum Hudson-Odoi that there is more to wide play than beating a full-back – and he was full of praise for him after this win. Willian made Tammy Abraham’s goal with a superb flick and he is building a strong case for Chelsea to extend his contract, which runs out next summer. “I can’t get involved in the money,” Lampard said. “That’s up to the club. But everyone sees how much I’m relying on him. I love him at this football club” Jacob Steinberg

VAR controversy aside, the most striking aspect of this game at the Tottenham Hotspur Stadium was the contrast in the teams’ displays. On one hand there was Sheffield United – organised, vibrant, full of ideas. On the other there was Spurs: ragged, listless, and largely clueless. Mauricio Pochettino’s men are way off the pace in the Premier League and it is hard to know where the manager starts in regards to fixing their problems. One area he may want to target immediately is full-back. Not for the first time, Serge Aurier and Ben Davies were poor, offering little from an attacking or defensive point of view. Juan Foyth has impressed at right-back and could be the long-term answer there, while at left-back it may be time for Ryan Sessegnon to get a run of games. What’s for sure is that something needs to change – and fast. Sachin Nakrani

6) Traoré now has two nations fighting over him

It would be easy to mock Aston Villa after they became the latest team to be shredded this season by Adama Traoré, whom Villa sold in 2015 without ever starting him in a Premier League match. But it has taken a while for Traoré, still only 23, to harness his undoubted talent. Only this season at Wolves has he developed into one of the most thrilling players around. “He’s playing well, sticking to his tasks, helping the team,” said Nuno Espírito Santo before adding the clincher: “And he gives you these unique moments that only he can produce.” No wonder Spain, whom Traoré has represented at under‑16 through to under-21 level, have given him his first senior call-up. The fact that he has pulled out with an unspecified injury gives hope to Mali that he can yet be persuaded to declare for the country his parents come from. Paul Doyle

Much of the post-mortem from Turf Moor will focus on another wretched West Ham display, but that should not diminish a gloriously merciless performance from Burnley. Dwight McNeil has been a revelation since being thrown into the deep end midway through last season, and this was perhaps his finest game yet. The 19-year-old identified his opponents’ achilles heel – the painfully hesitant keeper Roberto – and went about exposing it in brutal fashion, wasting no opportunity to lash a cross into the West Ham box. He delivered 12 in total, two of which ended up in the back of the net, with the sort of no-frills wing-play that is the stuff of dreams for Ashley Barnes and Chris Wood. Burnley delivered a 90-minute pummelling on Saturday, but while their brawny strikers took the acclaim, the biggest blows were landed by the spindly teenager on the margins. Alex Hess

Allan Saint-Maximin is the type of winger fans adore and at whom coaching technocrats roll their eyes. An elemental force of nature, Newcastle’s latest cult hero is unusual in that – with his teacher mother wanting him to concentrate on his education and, in particular, learning English – the 22‑year‑old was not coached one- and two‑touch football in a conventional academy. Instead, he played street football near his home on the outskirts of Paris, and became a highly improvisational dribbler with adhesive tight control. When he joined Saint-Étienne, and later Nice, his unorthodox gifts set him apart. Now he belongs to a distinguished rollcall of flashy French wide boys – David Ginola, Laurent Robert, Hatem Ben Arfa – for whom Newcastle fans have long harboured a particular weakness. Enjoy him while you can. Louise Taylor

9) Flores and Capoue can get Watford out of trouble

Watford have slowly been pulling themselves together under Quique Sánchez Flores, while their manager has been trying to find his best formula. A shift to a back three has stuck, though he has flicked through options at right wing-back. Up front he has tried to find the partnership that might get the best out of Gerard Deulofeu, who would be happiest taking on the opposition by himself as long as he didn’t have to defend. In midfield it has been constant churn, but that may have changed with the return of Étienne Capoue. The French defensive midfielder knows his role, plays it simply and allows others to advance. He made important interceptions and tacklesagainst Norwich, but his key contribution was the way he liberated Abdoulaye Doucouré and Will Hughes to advance in possession and press hard when out of it. Watford’s next two fixtures are against Burnley and Southampton. Flores might just want more of the same. Paul MacInnes

10) Are Southampton the division’s worst team?

As poor as Southampton have been, the problem for Ralph Hasenhüttl may not be the shortcomings of his own team but rather the quality of others. Southampton plan to stand by their manager but, having stayed up by the skin of their teeth in recent seasons, it is increasingly difficult to envisage them surviving another relegation battle. Is there a worse team in the division? Norwich may be bottom but have shown more courage and fight than Southampton. Hasenhüttl’s side turned in another abject performance in defeat at home to Everton on Saturday, and were booed off at full time. The home game against Watford at the end of November looks pivotal. “It’s uncomfortable but we’ve been here in the past so we know what it is,” said the Southampton midfielder, Oriol Romeu. “We have to be honest and try to be brave.” Ben Fisher