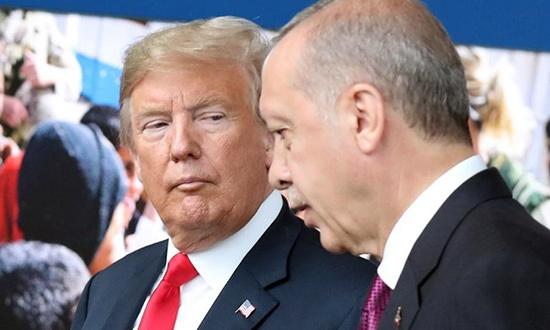 When US President Donald Trump hosts his Turkish counterpart at the White House on Wednesday, he will be spending his political capital not on Syria – but on preserving defense contracts worth billions.

Ankara in July said it was “evaluating” the purchase of the US Patriot missile defense system, hours after the arrival of the rival Russian S-400 system sparked uproar in Washington.

Washington had for months warned Ankara against purchasing the rival system, with Congress warning that the decision would trigger sanctions, halt an impending F-35 delivery and end Turkey’s lucrative role in the manufacturing process of the aircraft.

“The radar system would provide Russia with military sensitive info on the F-35, which is our top-quality fifth-generation aircraft,” Andrew Winternitz, acting deputy assistant secretary of defense for European and NATO policy, said at the time. “From our perspective, there are no measures that can mitigate our concerns on this,” he added.

A Pentagon spokesman in May said the Department of Defense was already working to identify alternative vendors to produce F-35 components manufactured in Turkey. Currently, eight Turkish companies are part of the supply chain of American defense contractors Lockheed Martin and Pratt & Whitney to make parts for the F-35.

Izmir-based Fokker Elmo, for example, manufactures 40% of the wiring and interconnection system.

These companies are set to lose US$12 billion in contracts should Turkey be removed from the F-35 program. In comparison, Turkey has paid a fraction of that – $2.5 billion – for the S-400 system, which NATO has emphasized is not compatible with the equipment of the alliance.

Trump is now expected to put the Patriot versus S-400 debacle at the front and center of his talks with Turkish President Recep Tayyip Erdogan.

In the run-up to the meeting, the US leader reportedly offered to re-admit Turkey into the F-35 manufacturing program, so long as Ankara agrees not to activate the S-400s already on its territory.

Trump’s overarching focus on preserving business deals with Turkey will likely suck up the mercurial leader’s attention, relegating Ankara’s invasion of northern Syria to the back burner.

This week, Turkish-backed Syrian factions continued an offensive aimed at seizing a corridor of territory in northeastern Syria and creating a demographic buffer of Sunni Arabs between Kurds on both sides of the border.

US troops, which just weeks ago carried out a chaotic pullout from bases across northern Syria on sudden direction from the White House, have since returned to several localities in the far northeast corner of the country and the oil-rich eastern province of Deir Ezzor.

But they are far from the key theaters of fighting, namely the historically Assyrian Christian region of Khabur.

Trump has previously stated the Kurdish PKK, the sister group of America’s key Kurdish allies, is even more dangerous than Islamic State. He has also expressed ambivalence over Turkey’s assault on Kurdish-majority regions, suggesting that Erdogan will not face strong pressure on that front come Wednesday.

Already, Trump appears to have absorbed Erdogan’s talking points on the S-400 rift, blaming the purchase on his predecessor, former US President Barack Obama.

At the G20 in Tokyo this summer, Erdogan expressed confidence he had the sympathies of Trump, who said his administration would look at options to avoid the S-400 purchase becoming an issue.

Trump has set a precedent of ignoring the US Congress when it comes to shepherding through controversial defense purchases by Middle Eastern states.

As recently as May, Trump invoked emergency powers to circumvent Congress and green light a series of weapons sales to Saudi Arabia and the United Arab Emirates despite censure over the war in Yemen.

When it comes to Turkey, according to US Treasury regulations the White House must impose at least five out of 12 available sanctions against any state engaging in a “significant transaction” with the defense sector of the Russian government.

The sanctions on offer include restrictions on financial transactions, trade and even travel by corporate officers.

With Turkey’s economy in dire straits, it is the threat of sanctions and the potential loss of billions of dollars worth of contracts which should provide Trump with an upper hand in negotiations.

Northern Syria, in contrast, has been treated by Trump as a thorn in his side, which he would prefer to be done with.

The Kurdish-led forces who served as America’s foot soldiers in the war against Islamic State cannot compete with Turkey as business partners and are likely to rise beyond a foot note in the talks.