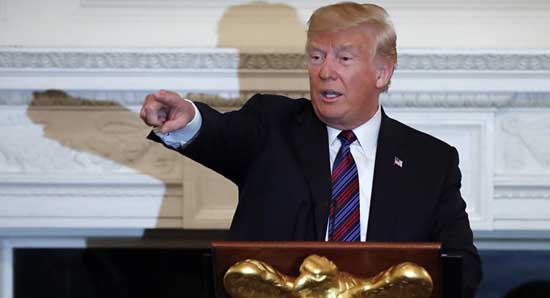 Markets had been on edge about Trump’s highly anticipated remarks to The Economic Club of New York, but barely moved after the speech, which contained no major policy announcements.

Rumors early on Tuesday that Trump might announce a venue and date for signing a trade deal with Chinese President Xi Jinping proved unfounded.

Trump said U.S. and Chinese negotiators were “close” to a “phase one” trade deal, but largely repeated well-worn rhetoric about China’s “cheating” on trade.

“They are dying to make a deal. We’re the ones that are deciding whether or not we want to make a deal,” Trump said of China. “We’re close. A significant Phase One trade deal with China could happen. Could happen soon. But we will only accept a deal if it’s good for the United States and our workers and our great companies.”

Trump said he would raise tariffs on Chinese goods “very substantially” if China does not make a deal with he United States. “And that’s going to be true for other countries that mistreat us too,” he added.

U.S. stocks largely drifted sideways as Trump spoke, holding onto a modest gain on the day. The S&P 500 .SPX was up about 0.3% in afternoon trade, close to a record high. The response in bond and foreign exchange markets was equally subdued.

“The only thing that’s maybe new is that he did not announce a date and a time for a signing ceremony. Where markets had been hoping for that, those hopes were dashed,” Anderson said, adding that buying of riskier assets faded when it became apparent that no major announcement would be made.

Trump once again took aim at the Federal Reserve’s monetary policy decisions that have left U.S. interest rates higher than many other economies and said he would prefer negative rates.

“Remember we are actively competing with nations that openly cut interest rates so that many are now actually getting paid when they pay off their loan, known as negative interest. Who ever heard of such a thing?” he told members of the Economic Club of New York.

The Fed has cut interest rates three times since July, but that followed a string of nine increases since late 2015. Trump has repeatedly railed against the Fed for not lowering rates even further.

Trump touted tax cuts passed by Republicans in 2017, saying they have created an unprecedented economic boom, and said there was room for further reductions in rates too, alluding to a Republican “tax cut 2.0” plan that has been stalled by Democrats in the House of Representatives.

As he often has, Trump pointed to the market’s run to a record as a validation of his economic and trade policies.

The S&P is up more than 36% since Trump took office, though two-thirds of that gain occurred in his first year in the White House before his focus turned to trade and he began imposing tariffs on imports from China. Stocks have found the going far more choppy since the first wave of tariffs were imposed in 2018.

The latest back-and-forth between Washington and Beijing illustrate the bumpy state of play. Last week, officials from both sides said they had a deal to roll back tariffs, only to have Trump deny any deal was agreed on.

It was Trump’s second appearance at the storied club, which has hosted U.S. presidents including Woodrow Wilson and John F. Kennedy, as well as foreign leaders like former Soviet President Mikhail Gorbachev here and Chinese Premier Li Keqiang here He previously addressed the organization in 2016 when running for president.