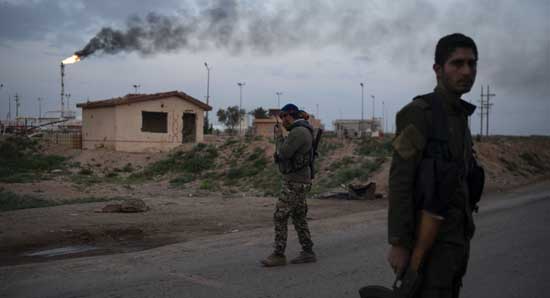 Damascus, Moscow, Ankara and others have repeatedly criticised US efforts to continue to hold onto oil-rich areas of Syria, saying such actions are in blatant violation of international law.

The United States is looking to illegally separate territories on the eastern bank of the Euphrates and create a separate, illegal, quasi-state there, Russian Foreign Minister Sergei Lavrov said, speaking at the Paris Peace Forum on Tuesday.

“On the eastern bank of the Euphrates River, they are doing everything possible to create the structure for a quasi-state, and are asking the Gulf States for major investments in order to create a local administration on the basis of the Syrian Democratic Forces, the Kurds – the YPG People’s Protection Units and others, with the clear intention of breaking this piece of territory off from Syria, and controlling the oil fields located there,” Lavrov said.

At the same time, Lavrov accused the US of prohibiting its allies from investing in Syria’s reconstruction.

“When it comes to Syria’s reconstruction, we, together with the Syrian government, support inviting everyone [to participate], in creating conditions for the modernisation of infrastructure and the return of refugees, so that the country can return to a normal life. The United States categorically denies the need for this, and prohibit its allies – NATO, the European Union, countries of the region, from investing in any projects in the territories controlled by the Syrian government,” the foreign minister said.

Last Year, Syrian authorities estimated that between $200 and $400 billion in investment, and up to a decade would be needed to rebuild Syria following the conflict. The US and its European allies have refused to commit to funding reconstruction efforts, although many European countries are facing major social tensions, due to the influx of Syrian refugees into Europe.

In his remarks on Tuesday, Lavrov urged Syria’s Kurds to take part in the political dialogue on the situation in the country but called on Kurdish representatives to be consistent in their position.

“If from the start of the conflict, they decided that they can act with US support, when they announced the creation of the Rojava Federation, and that the US would provide them with support in a movement toward separatism, this was their decision,” the diplomat said. “We attempted to explain to them, and the Syrian government, that it is important to begin a dialogue between Damascus and the Kurds. The Kurds did not show interest in this. They were convinced that the United States would always support them,” he added.

Lavrov lamented that although Kurdish authorities did ask Moscow for assistance in starting a dialogue with the Syrian government, as the US announced its partial withdrawal from eastern Syria in October, they appeared to lose interest in such dialogue once the US said that they would return to the war-torn country to control its oil fields.

“I have no doubt in my mind, that a solution to the Syrian process can be achieved, only if the interests of the Kurds, and all of Syria’s ethnic groups, are taken into account,” stressed Lavrov.

With regards to Syria’s Kurds, the Damascus government has repeatedly spoken out against the creation of any special autonomy for the country’s Kurds, citing Syria’s multi-ethnic and multi-confessional nature.

Over the past several weeks, US President Donald Trump has repeatedly said that the US would be “keeping” Syria’s oil, with the Pentagon clarifying that the mission of the US military in Syria will now include preventing the country’s oil stocks from falling into the hands of either terrorists or the Asad government.

Trump’s comments brought him widespread condemnation, including among his opponents at home, who warned that taking another state’s natural resources, violates international laws against pillaging.

Commenting on President Trump’s comments regarding Syria’s oil, Syrian President Bashar al Assad said that the US president’s policy was nothing new, with the US government, the CIA and others involved in the smuggling and looting of Syrian oil going back to at least 2014, in his estimation. Trump, Assad said, “just announce[d] the truth” about US policy.