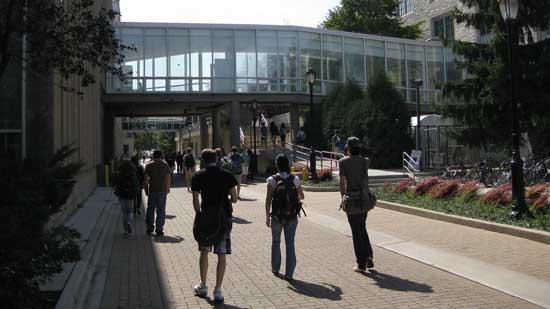 A US college newspaper has apologized for photographing and talking to protesters who picketed a speech by former Attorney General Jeff Sessions. The paper claims that standard journalistic practice hurt their feelings.

Sessions was invited to Northwestern University last week by the College Republicans. Northwestern being an American campus, protesters turned out to heckle Sessions, in particular for his role in implementing President Donald Trump’s administration’s “zero tolerance” immigration policies last year.

The social justice crowd booing a Republican is nothing new, but the college newspaper, the Daily Northwestern, reported the event dutifully, photographing the protests and texting demonstrators for comment. All standard journalistic practice.

But in the age of ‘safe spaces’ and ‘trigger warnings,’ basic journalism school techniques are apparently too much. After some of its reporters shared photos of the protests (as the First Amendment entitles them to do), the paper abruptly pulled the photos on Sunday and issued an apology.

The photos, it said, were “retraumatizing and invasive.” Texting protesters for comment was an “invasion of privacy.” In eight paragraphs of social-justice twaddle, the letter praised the protesters “who identify with marginalized groups” and go through “distressing experiences on campus” – like choosing to protest a lecture by a Republican.

The letter, signed by editor-in-chief Troy Closson, paid lip service to the newspaper’s mission to “document history and spread information,” but staff ultimately decided that “nothing is more important than ensuring that our fellow students feel safe.” The supposed danger faced by the protesters was not described, save that the university could “directly hurt” them in some way. After all, they were students publicly demonstrating in a university, not dissidents in a dictatorship meeting with the press.

Nevertheless, the Daily Northwestern pleaded for forgiveness, imploring readers to help “rebuild trust that we weakened or lost last week.”

To some professional journalists, the Daily Northwestern’s decision to abandon journalism for feelings was a bridge too far. “Being a journalist requires empathy,” the Chicago Tribune’s Gregory Pratt tweeted, “but this piece ain’t it.”

“How is it possible that a newspaper at what is allegedly a top journalism school would apologize for the basics of reporting?” asked the Washington Post’s Glenn Kessler. “This is a travesty and an embarrassment.”

The Daily Northwestern is not the first campus newspaper to voluntarily censor itself in the face of uber-liberal backlash. Appalachian State University’s paper apologized for publishing an op-ed criticizing the social justice movement’s obsession with redressing historical injustices. Enraged students had called the piece “thinly veiled white supremacist rhetoric.”

Newspapers that don’t bend to the outrage mob have found themselves targeted too. Last year, stacks of a satirical conservative newspaper at South Carolina’s Clemson University were torn to shreds for making fun of the diversity movement, while last month at Harvard, a pro-immigration group lobbied and petitioned the student paper against contacting Immigration and Customs Enforcement (ICE) for comment on immigration stories.