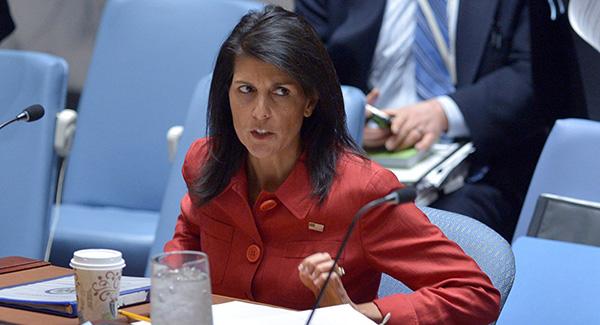 Former UN Ambassador Nikki Haley stood by US President Trump’s phone call with his Ukrainian counterpart during a heated interview on the “Today” show Tuesday.

Haley, 47, who has been defending Trump in a media tour to promote her new book, “With All Due Respect: Defending America with Grit and Grace,” had a heated debate with Savannah Guthrie.

Haley defended Trump’s July 25 call with President Volodymyr Zelensky that sparked an impeachment inquiry on whether Trump withheld  $400 million in aid in exchange for a probe into former Vice President Joe Biden – the 2020 presidential candidate. The ex-UN ambassador argued that there was no impeachable offence since the “aid flowed.”

“Here you’ve got a situation where there was no investigation, and the aid flowed as it was supposed to,” she said. “So, when you look at that situation, it’s hard to see where impeachment would qualify.”

“That doesn’t seem like much of a defence of the president,” Guthrie argued as she pushed Haley on whether Ukrainian aid was held up. “That he might have tried to do those things, but it didn’t work out, so it’s all OK.” Haley in return repeatedly pointed out that “it was released.”

“Savannah, I talked to him multiple times, and when I had issues, he always heard me out. I never had any concern on whether he could handle the job, ever,” the former ambassador replied.

Democrats believe that the president held back aid to Ukraine in a bid to pressure its leadership into opening an investigation into allegations Biden, a Democratic candidate for the White House whose son Hunter was a board member at Ukrainian gas company Burisma, engaged in corrupt acts. Trump has denied applying pressure on the Ukrainian leadership while he requested it to probe possible instances of corruption, which he said is his duty as US president.