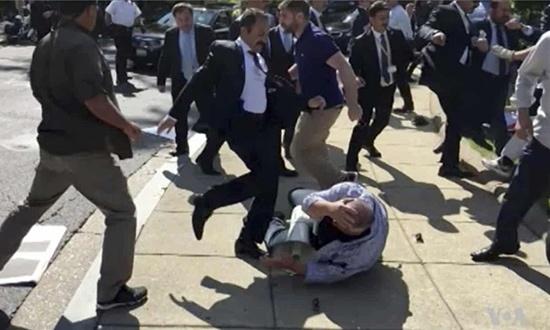 Police in Washington DC, the US state department and the Secret Service are girding themselves for the return of Recep Tayyip Erdoğan on Wednesday, 18 months after the Turkish president’s bodyguards ran riot in the city, assaulting protesters and American security officers.

Newly declassified state department documents provide fresh details of the aggression shown by the Turkish security detail towards their US counterparts both before and after the 2017 attack near the Turkish embassy in north-west Washington. Six officers from the US Secret Service, two from the diplomatic service and one from the Washington police required medical treatment.

The worst injuries, however, were suffered by a small group of protesters that included women, children and elderly men, who were punched and pushed. Some were kicked repeatedly by Erdoğan’s bodyguards and supporters while they were on the ground, and at least two sustained brain injuries from which they are still trying to recover.

The protesters, mostly Kurdish Americans, are making their own preparations for Erdoğan’s return. They plan to turn up in far greater numbers, with the support of ethnic Armenians, dissident Turks and others, to protest against Erdoğan’s treatment of minorities, the Turkish incursion into Syria, Donald Trump’s support for Erdoğan and the failure to bring any of the Turkish security officers to justice after the last visit.

Murat Yasa will be among the protesters on Wednesday, just as he was on 16 May 2017 in Sheridan Circle, a large grassy roundabout near the Turkish ambassador’s residence, in the heart of Washington’s embassy district. His life has been utterly changed since that day when he was pushed to the ground and kicked repeatedly in the head.

“About 20 or 30 of them attacked us from the right, the left, the middle. The police couldn’t stop it,” Yasa, a 62-year-old Kurdish American from Virginia, said.

Video of the incident shows Erdoğan’s security agents were among the attackers, dressed either in black suits and ties or olive green shirts. The video footage also shows Erdoğan looking on while attacks took place.

“When they attacked us, as I was next to Kurdish woman, I tried to protect her, because they, someone was trying to kick her, and then someone pushed me from behind, I lost my control and I was on the ground. And then one after another, after another, they were kicking my head,” Yasa recalled.

He remembered one of his attackers shouting at him as he lay bleeding: “You think when you came to America you saved yourself. Wherever you go, you Kurd bastard, we will come to get you.”

Yasa sustained brain injuries from the attack. He needs medication to sleep and ward off nightmares, and he suffers from short-term memory loss. He had to give up working in the flooring company he built up since arriving in the US in 1987, and is now an Uber driver.

“I never, ever thought that this is going to happen to me in the United States,” Yasa said.

He knows others who took part in the 2017 protests whose families in Turkey have been threatened. He takes greater security precautions to reassure himself he is protecting his immediate family in Virginia but vows nothing will stop him joining the protests against Erdoğan once more on Wednesday.

Nineteen people, including 15 Turkish security officers, were indicted for the 2017 attacks. But in the spring of 2018, with no official explanation, charges were dropped against 11 of the Turkish agents. Twenty of the victims are suing the Turkish government for damages, in two separate lawsuits.

State department documents declassified in response to freedom of information requests by the plaintiffs’ lawyers show the extent of tension between US and Turkish security officers from the moment of the arrival of Erdoğan’s entourage.

In an official report of the visit, the unnamed diplomatic service agent in charge said he had to step in to contain a furious row among Turkish security guards at Washington’s Andrews military airfield because he feared “a possible altercation or assault on the tarmac”. He reported Erdoğan’s chief bodyguard appeared to be responsible.

The agent also noted a police report that “Turkish security officers used some sort of unknown aerosol on the protesters which they are investigating further.” It is still unclear what was in the spray.

According to the agent’s report, Turkish security officers repeatedly ignored US instructions to stay in their cars, and instead leapt out to join in the attack on protesters.

In a later incident outside the Turkish embassy, a few hundred yards from Sheridan Circle, a spat broke out over who should take the visiting foreign minister’s luggage out of a US car, which led to a Turkish guard slapping a US officer who was trying to remove the bags.

A few minutes later, a fight broke out between US and Turkish officers outside the embassy. Washington police intervened to subdue the Turks. But the incident could easily have escalated further, the report said.

Before the presidential party left, the Turkish ambassador to Washington, Serdar Kiliç, asked the diplomatic service agent-in-charge “if I could find a way to have the Turkish security officers released by ‘looking past’ what had happened and allowing them to fly back to Turkey as scheduled”.

The Turkish guards were released an hour and a half later, and left the country. The injured protesters believe that the demands of justice were subordinated to Trump’s desire to maintain a good relationship with Erdoğan, a desire that ultimately led to him to green-light the Turkish incursion into north-eastern Syria last month.

The US Secret Service said it would not comment for operational security reasons about “protectees, protective means, methods and or protective responsibilities”. The state department said the diplomatic security service “does not go into details about specific security plans, nor does DSS comment on security plans for United States Secret Service protectees”. The Turkish embassy did not respond to a request for comment on preparations for Wednesday’s Erdoğan visit.

It is unclear what action, if any, US authorities would take if the bodyguards responsible for the 2017 attack returned as part of the presidential party.

“I’m sure he’s going to have his goons with him,” Genc said. “I really hope sincerely that he doesn’t have the same guys with him because that would just be literally like spitting on our face.”