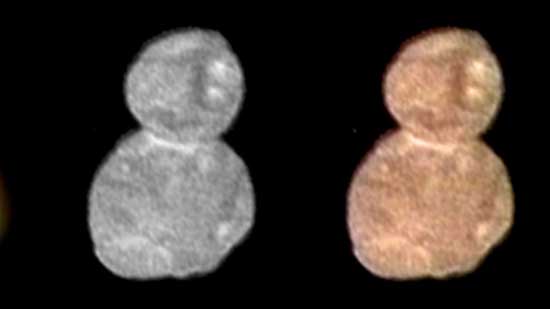 NASA has given a new name to a remote space rock after its previous moniker came under fire in a wave of PC outrage, with progressive-minded critics insisting the name was tainted by links to Nazi Germany.

Informally dubbed “Ultima Thule” last year by the team leading NASA’s New Horizon mission, asteroid (486958) 2014 MU69 is located in the Kuiper Belt about a billion miles beyond Pluto. In January it became the most remote object ever visited by a human spacecraft. Not content to simply accept the awesome feat of engineering, however, the outrage mob soon had its say, slamming the US space agency for choosing a nickname with tangential connections to Nazis.

“The name has some unsavory connotations,” wrote Newsweek’s Meghan Bartels. “It was adopted by the forerunners to the Nazi party, and the term remains in use by modern so-called alt-right groups.”

Some opponents went even further, suggesting employees at NASA were in on a scheme to use the cryptic Nazi reference on purpose.

NASA previously defended the title, with New Horizon’s principal investigator Alan Stern insisting “just because some bad guys once liked that term, we’re not going to let them hijack it.”

On Tuesday, however, the agency appears to have done just that, scrapping Ultima Thule altogether in favor of a new name: “Arrokoth,” meaning “sky” in several Native American languages. Taking extra to insulate themselves from any further woke criticism or accusations of ‘cultural appropriation,’ NASA also made sure to obtain “consent” from native tribal elders before bestowing the new name upon the space rock.

The term “Thule” did feature in obscure Nazi occult circles in the 1930s and 40s, but for centuries it served an entirely different purpose. First appearing in the literature and maps of the ancient Greeks, the term “Ultima Thule” was adopted in the medieval period to refer to any far-off place outside the boundaries of the known world – in other words, the precise meaning NASA had intended for it.

For progressive activists prone to see “far right ideology” lurking around every corner, however, the tortured Nazi connection was impossible to pass up.

On the other hand, perhaps NASA’s own historical links to Nazis gave the agency ample reason to reconsider the name. After World War II, the US government secretly recruited hundreds of Nazi scientists as part of ‘Operation Paperclip’ – many of whom, including famed engineer Wernher von Braun, ended up working on NASA’s rocket program.

The naming mishap is not the first time woke warriors have made their presence felt in the fields of science. Back in 2014, a scientist on the team operating the Rosetta probe – the first craft to ever land on a comet – faced a barrage of criticism and attacks online from the PC mob. The scientist’s crime was not falsifying data or plagiarism, however, but rather the shirt he decided to wear on a live broadcast, which featured scantily-clad cartoon women.

The wardrobe choice sparked accusations of “misogyny” in the STEM fields, ultimately forcing the researcher to offer a tearful apology to his outraged critics.