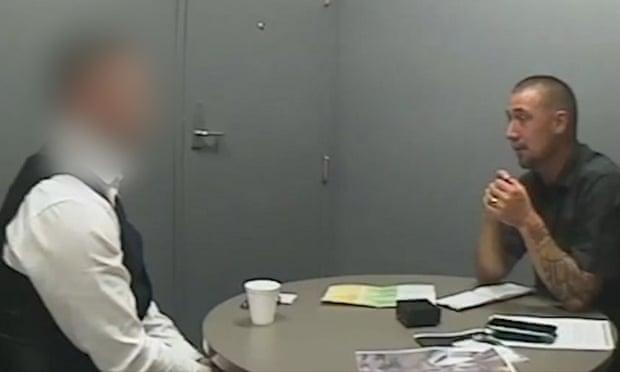 The man accused of murdering Grace Millane was gave a series of contradicting accounts during a police interview. Photograph: New Zealand police

The jury in the Grace Millane trial has seen confronting CCTV footage of the man accused of her murder wheeling a luggage trolley bearing two suitcases – one containing the 21-year-old’s body – into a hotel lift and loading them into a hire car.

The first police interview with the man accused of murdering the British backpacker has also been shown to the court, in which the suspect gave police accounts of his movements on the night of Millane’s death and days afterwards that were contradicted by CCTV footage.

The 27-year-old New Zealand man, whose name has been suppressed by the court, has pleaded not guilty to Millane’s murder.

The accused told police in his first interview that he left Millane after their date at 8pm on 1 December 2018 and spent the evening drinking alone at a pub, before blacking out and having the concierge carry him to bed.

The accused told police he “can’t remember” everything that happened to him after 11pm on 1 December, a Saturday night.

The next morning he told police he slept until 9 or 10am; saying when he woke up: “I had a bit of a vomit … I didn’t feel well, I didn’t feel well at all”, before going to an Irish pub for a steak and chips breakfast. On Monday 3 December the accused told police he took the day off work and spent the day in bed, at McDonald’s and falling asleep on a park bench at Aotea Square.

However CCTV footage shown to the court has contradicted this account.

The footage begins just after 8am on 2 December, and captures the accused leaving the CityLife Hotel and returning 14 minutes later with a large suitcase purchased at the Warehouse.

At 8.40am the accused was captured on CCTV cameras at a local supermarket purchasing cleaning products, and at 10.40am he took a taxi to a car rental shop, where he hired a car for a day. Later on Sunday the accused met a woman for a date at a bar in Ponsonby – where he told police he had met a colleague from work. Millane’s body was still in his room while he was on the date. The court heard he told his Tinder date he had spent the day looking for “a large duffel bag with wheels” so he could carry his sports gear.

That evening the accused made a second trip to the local supermarket to hire a carpet cleaner, and later loaded two large suitcases onto a luggage trolley and wheeled them to the carpark.

One of the suitcases contained the body of Millane.

The court heard that the accused’s date on Sunday felt he was “intense” and made her uncomfortable – so much so she lied about where she had parked her car, because she didn’t want to see him again.

The accused told her his only friends in Auckland were police officers, and that they had told him they were struggling because so many bodies were missing in the Waitakere Ranges, and police dogs were unable to sniff out bodies buried more than four feet deep.

“He seemed quite concerned and self-assured about it … I personally thought it was an unusual thing to say on a date,” the woman said.

The defence counsel noted that not all of the accused’s movements were displayed in the Crown’s “highlights” reel shown to court. The Crown confirmed that more movements of the accused had been captured on CCTV, but these had been edited down to ones that pertained to the alleged crime.

The footage brought Millane’s parents and police officers in the public gallery to tears.

On 3 December, when the accused said he took the day off work to recover from a hangover, CCTV footage shows him leaving the CityLife hotel after 6am, and driving west of the city on the motorway, where he stopped to buy a red shovel and bolts just before 7am.

Millane’s body was later found buried in a shallow grave in the Waitakere Ranges, a bushland area west of the city.

In the accused’s first interview with the police, before he was arrested, he said that by Sunday morning, when he checked his phone, Millane had “unmatched” him on Tinder, and all their messages had been deleted.

“I tried to text her the next day on Tinder but I had been unmatched, and I was like ‘ugh what is going on here I must have done the wrong thing’” the accused told police.

The crown alleges Millane was murdered by the accused in his hotel room. His defence claims she died by accident after engaging in a sex act during consensual sex. It is not disputed that Millane died in the CityLife hotel by strangulation, and that the accused buried her body in a suitcase .