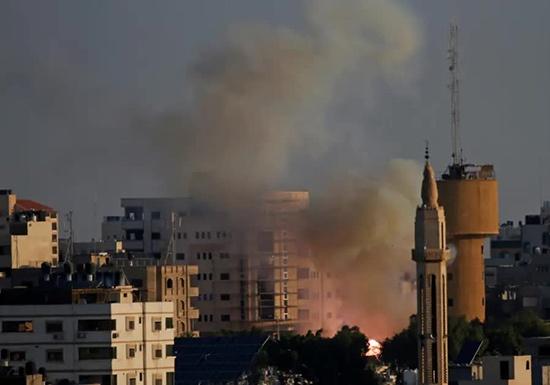 On Tuesday, Israel was pounded by close to 200 rockets following the predawn targeted killing of Palestinian Islamic Jihad (PIJ) Leader Bahaa Abu Al-Ata at his home in the Gaza Strip.

Read More Related Articles
Earlier in the evening, IDF aircraft attacked three terrorist operatives in the northern Gaza Strip after they launched rockets from Gaza into Israel.
On Tuesday, Israel was pounded by close to 200 rockets following the predawn targeted killing of Palestinian Islamic Jihad (PIJ) Leader Bahaa Abu Al-Ata at his home in the Gaza Strip. His wife was killed in the assassination, as well.

“We are not interested in an escalation but we are ready – on the ground, in the air and at sea,” Kochavi said.

The military said that all the airstrikes in the first wave targeted PIJ underground facilities used for storage and manufacturing of weapons and training camps. These sites were critical facilities for the group which invested large sums of money to construct.

The second wave targeted training compounds, including one used by PIJ’s naval commando unit, the shaft of a cross-border attack tunnel and a tunnel digging site.

None of the retaliatory strikes carried out by Israel targeted Hamas, the group the IDF tends to strike following violence from the Strip. Earlier in the day defense officials said that if Islamic Jihad restrained itself and Hamas did not join the rocket fire, Israel would also hold back from escalating and carry out retaliatory strikes against Hamas.

Israel said that it targeted Al-Ata to stop his plans to carry out a series of attacks against Israeli civilians and IDF troops, including preparations for sniper and kidnapping attacks, armed drone attacks, and rocket fire throughout Israel.

“Terrorists think they can hit civilians and hide behind civilians,” Prime Minister Benjamin Netanyahu said. “We showed that we can hit the terrorist with minimal damage to civilians. Anyone who thinks they can hit our civilians and get away with it is wrong. If you hit us we will hit you.”

Al-Ata, Kochavi said, was the man “who undermined the quiet in southern Israel” and who “acted in every way to sabotage attempts for calm with Hamas. He was a living ticking bomb, and up until today worked and planned attacks. He was responsible for the majority of attacks that took place over the past year.”

Almost 200 rockets were fired towards Israel on Tuesday morning after the IDF confirmed that it had killed al-Ata in Gaza in a “surgical airstrike.”

An hour after the strike, sirens were activated in numerous communities bordering the Gaza Strip as well as the cities of Ashkelon, Ashdod and Gedera. Incoming rocket sirens were also activated in the central Israeli cities of Tel Aviv, Rishon Lezion and Holon.

Several rockets made direct impacts on homes and businesses, causing first responders to treat 39 people, including two suffering from shrapnel wounds and an eight-year-old girl who collapsed while running for shelter in Holon. She was evacuated to Wolfson hospital in serious condition.

IDF Spokesperson Brig.-Gen. Hidai Zilberman confirmed Tuesday morning that the military had received specific intelligence on al-Ata’s location and targeted the specific room where he was sleeping, leaving the rest of the building untouched in order to avoid civilian casualties.

“Over the past few months the IDF warned several times, and in various ways, that he should stop his activities,” Zilberman said. “The Chief of Staff decided on this operation because there was no other way.”

The operation against Al-Ata was approved by the security cabinet led by Netanyahu, who also served as Israel’s defense minister until later on Tuesday. It was done after consultations with the IDF top brass in a joint operation with the Shin Bet.

“We stand behind the security forces, who have been working for the success of this morning’s operations for a long time,” said President Reuven Rivlin in a statement. “I know that they, and the Israeli government that approved the operation, have Israel’s security, and only that, in their minds.

“This is no time for political squabbles, and those who do so bring no credit to themselves. It is the time to stop such statements immediately. Israeli citizens – please listen to the life-saving instructions of the IDF Home Front Command and take good care of yourselves.”

Islamic Jihad confirmed that al-Ata along with his wife were killed instantly in the airstrike which was carried out by one missile. Two of his children were seriously wounded and rushed to hospital, the terrorist group added.

Islamic Jihad Secretary-General Ziad al Nakhaleh, based in Damascus, said in response to the assassination that Netanyahu has “crossed all redlines.”

“We are going to war,” Nakhaleh said.

The PIJ’s Al-Quds Brigade declared that the terrorist group was on the highest level of alert after the assassination.

The Hamas terrorist movement warned as well that the assassination “will not go unpunished.”

Hamas spokesman Fawzi Barhoum said in a statement that “the blood of our people and leaders is a redline and precious to all Palestinians.” The killing of al-Ata, he said, is a “dangerous escalation and a continuation of the aggression and crimes against our people and its resistance.”

Barhoum accused the Israeli government of seeking to “export its internal crises and impose new equations.” Israel, he added, “must pay the price and bear responsibility for the consequences” of the targeted killing.

Al-Quds Brigades, said in a statement that al-Ata, commander of the northern Gaza Strip, was “martyred while performing heroic jihad [holy war] to thwart conspiracies and defend the land.”

The group vowed to continue in the footsteps of its slain commander in order to “complete the process of liberation of the entire beloved Palestine. Our response will inevitably shock the Zionist entity.