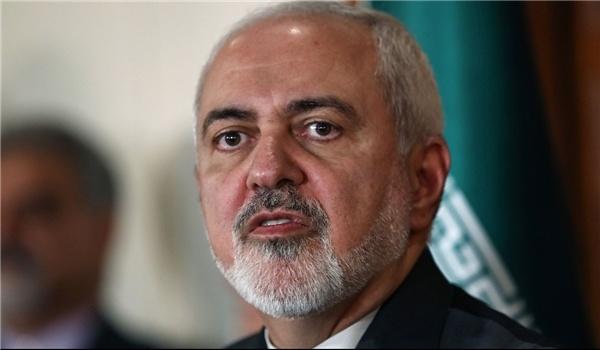 TEHRAN (FNA)- Iranian Foreign Minister Mohammad Javad Zarif rapped the European states for their recent statement in which they called on Tehran to remain committed to the nuclear deal, without upholding their commitments.

Writing on his twitter page on Tuesday, Zarif addressed his EU/E3 Colleagues by referring to their recent statement in which they had claimed that the EU has “fully upheld commitments under JCPOA”, and asked, “You? Really?”

“Just show one that you’ve upheld in the last 18 months,” he added.

“Iran triggered and exhausted-dispute resolution mechanism while you were procrastinating. We’re now using para(graph) 36 remedies. Look at my 6/11/18 letter,” Zarif wrote, posting a copy of the letter on his twitter page.

In a statement on Monday, the foreign ministers of France, Germany and Britain and the High Representative of the European Union voiced extreme concern by the latest announcements that Iran is restarting uranium enrichment activities at the Fordow facility.

They also claimed full commitment to the nuclear deal, while Tehran has in the past 18 months complained about their procrastination in implementation of the internationally-endorsed agreement.

Iranian President Hassan Rouhani underlined on Monday that his country would continue scaling down its nuclear deal undertakings until the Europeans come in full compliance with their obligations under the agreement.

“Any day that you comply with all your undertakings, we will revive all our undertakings too and will implement them. A unilateral undertaking is not accepted,” President Rouhani said, addressing people in the Southern city of Rafsanjan.

He referred to Iran’s modification of nuclear deal undertakings given the US withdrawal and the Europeans’ lagging in implementation of their commitments, and said, “Since our path is correct, we will continue this path. We stand against our enemies with all our power. We have done nothing illegal and complied with the law and we do not bow to your orders.”

Rouhani rebuffed US President Donald Trump’s remarks that Washington was fooled into signing the nuclear deal with Iran, and said the parties to the agreement discussed it for two years and the then US secretary of state, president, negotiators and lawyers were all informed of its contents.

He also stressed Iran’s determination to maintain the nuclear deal, and said with this policy the country will achieve a big political, security and defensive goal next year which is the removal of arms sanctions against Tehran based on the nuclear deal and the UN resolution 2231.

The measure at Fordow was taken upon an executive order by President Hassan Rouhani in coordination with the Supreme National Security Council (SNSC).

A cylinder including 2,000 kg of uranium hexafluoride (UF6) was transferred from Natanz to Fordow nuclear site. Then, the cylinder was connected to the feeding lines at Wednesday midnight.

Following the successful technical overhaul, the gas injection to the chains as well as the centrifuges and producing and gathering enriched uranium began at Fordow under the supervision of the International Atomic Energy Agency (IAEA).

President Rouhani had announced on Wednesday that the nuclear facility at Fordow would soon begin its full operation after injecting UF6 gas into centrifuge machines in line with the fourth step of reducing his country’s nuclear deal undertakings.

“Iran’s 4th step in reducing its commitments under the JCPOA begins today by injecting gas to 1044 centrifuges. Thanks to US policy and its allies, Fordow will soon be back to full operation,” President Rouhani wrote on his twitter page.

He underlined that Iran does not keep its enriched uranium and produced heavy water limited, and noted, “The EU/E3+2 will face Iran’s further actions if they cannot fulfill their obligations within the next 60 days and secure Iran’s interests.”

He had announced on Tuesday that Tehran would take the fourth step to scale down its nuclear deal undertakings by injecting gas into 1,044 centrifuges at Fordow nuclear site on Wednesday.

“We will take the fourth step in reducing commitments to the JCPOA (tomorrow) and I will declare the directives to the AEOI (the Atomic Energy Organization of Iran) today,” President Rouhani said, addressing the inauguration ceremony of Azadi Innovation Factory, a venue for the gathering of startups.

“Under the JCPOA, we were required to have up to 1,044 centrifuges at Fordow, which were supposed to spin idly without gas (being injected into them). Starting tomorrow, we will start injecting gas into the centrifuges at Fordow as part of the fourth JCPOA step,” the president added.

“To all the remaining sides to the JCPOA and other friendly countries, I’d like to state in advance that our new measures will be taken under the supervision of IAEA,” said Rouhani.

“Also, all measures in the fourth step are reversible just like in the previous steps; that is, as soon as the other sides to the agreement begin to live up to their commitments, we will resume our own suspended commitments as well,” he added.

“Some countries made efforts to reach positive results before the fourth deadline ran out, but we have no other choice but to take the fourth step starting tomorrow,” Rouhani said.

He went on to stress, however, that “there is time for negotiations for the next two months. If we reached a proper solution for the removal of sanctions on our export of oil and metal, if we could easily use our money in trade transactions, then we would be fully ready to return to the previous conditions (regarding the level of our JCPOA commitments”.

On October 2, Supreme Leader of the Islamic Revolution Ayatollah Seyed Ali Khamenei said that the Islamic republic would continue reduction of its commitments under the nuclear deal.

He tasked the AEOI with implementing the drop of nuclear commitments “precisely and completely until we achieve a desired outcome”.

As a reaction to the US unilateral withdrawal from the JCPOA in 2018 and its subsequent sanctions on Tehran and in a response to Europe’s sluggishness to save Iran’s interests under the deal, Iran started modification of its nuclear deal undertakings in May.

Tehran has rowed back on its nuclear commitments three times in compliance with articles 26 and 36 of the 2015 deal.

Iran says its reciprocal measures will be reversible as soon as Europe finds practical ways to shield the Iranian economy from unilateral US sanctions which were imposed last year when President Donald Trump withdrew from the 2015 nuclear deal.

Iranian Government Spokesman Ali Rabiyee said in September that his country was determined to take the fourth step to modify its nuclear deal undertakings unless the Europeans do their obligations under the Joint Comprehensive Plan of Action (JCPOA).

“Our move towards to the third step depends on the other side’s compliance with its undertakings and Tehran’s satisfaction with the Europeans’ fulfillment of their obligations,” he added.

Rabiyee warned that Iran will take a “strong” step if Europe fails to use the remaining opportunity to implement its Joint Comprehensive Plan of Action (JCPOA) undertakings.

“We have installed 15 new-generation centrifuges in the past two months which is a very big achievement,” Salehi said in an interview with the state TV.

“Now, our capacity (to produce uranium) has reached 8,660 SWU and we could produce nearly 450g of uranium a day before the third step (of the modification of Iran’s nuclear deal undertakings) and now it has increased to over 5,000g daily,” he added.

He underlined that his organization planned to launch a chain of 30 IR6 centrifuges 3 to 4 years from now after testing a chain of 20 centrifuge machines, but it changed plans to take the step faster due to the high-ranking officials’ decision to modify nuclear deal undertakings in response to the European states’ disloyalties and display the Islamic Republic’s potential and power.

On April 9, Iran announced the installation of a chain of 20 advanced IR6 centrifuges in the Natanz enrichment facility in Central Iran.

The Iranian officials had earlier warned that the European Union’s failure in providing the needed ground for Tehran to enjoy the economic benefits of the nuclear deal would exhaust the country’s patience.