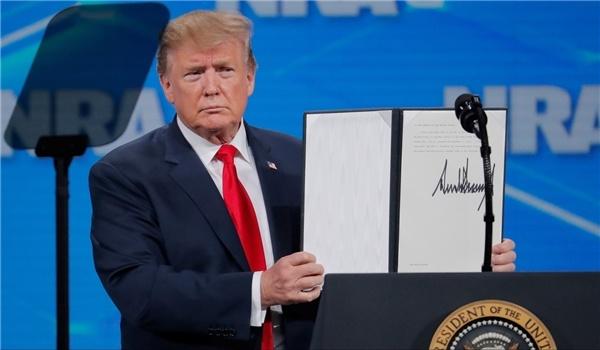 TEHRAN (FNA)- Iranian President Hassan Rouhani underlined the need for continued talks to save the nuclear deal and remove sanctions against Tehran, but meantime, said that his American counterpart Donald Trump is not a person to be trusted at all.

“When I was in New York (for the UN General Assembly meeting), relatively good proposals were raised and I could decide there to break the sanctions but the prevailing conditions displayed that we could not trust the US president,” Rouhani said in Tehran on Tuesday.

“The US president makes a different decision every day and if another president was ruling the US, we could have ended the job late in September; some countries still try to play a mediatory role and make some proposals and we give them some proposals too,” he added.

“We have reached an agreement on principles and we have problems on methods for implementation (and) we do not leave the path of negotiations but do not rely just on talks either and we should make efforts, cooperate and maintain our unity,” Rouhani said.

In relevant remarks in September, Supreme Leader of the Islamic Revolution Ayatollah Seyed Ali Khamenei underlined the necessity for the country’s interaction with different world states, except Israel and the US, and said Washington and the European states which had shown clear animosity towards the Iranian nation should not be trusted.

“The way for interaction and negotiation with any country, except the US and the Zionist regime, is not closed but the countries which have hoisted a flag of hostility against the Islamic Republic, headed by the US and some European countries, should not be trusted at all because they clearly show animosity towards the Iranian nation,” Ayatollah Khamenei said, addressing members of the Assembly of Experts in Tehran.

“The Europeans step onto the scene seeming as a mediator and negotiate. They make contacts, speak for a long time, and make promises, but all in vain,” he said, and added, “They are neither able enough nor dominant enough nor have sufficient possibilities, yet their thoughts are the very same thoughts of the Americans.”

Ayatollah Khamenei blasted the European states for disloyalty to the nuclear deal and their practical commitment to the US sanctions, and said they are unlikely to act any differently in future as well; “therefore, we should be fully disappointed at the Europeans”.

He stressed that there is no ban or problem with meeting or signing contracts with the European states, but no hope should be pinned on them and no trust should be laid in them.

Ayatollah Khamenei referred to the social, political and economic situation of the US and Europe, and said, “The US which is our main enemy is today the most hated government in the world and the Europeans are themselves admitting their weaknesses and decline of their power.”

He described the economic problems of the European states as serious, and said, “Everyone is witnessing the political problems of Britain and France and therefore, we should use this opportunity.”