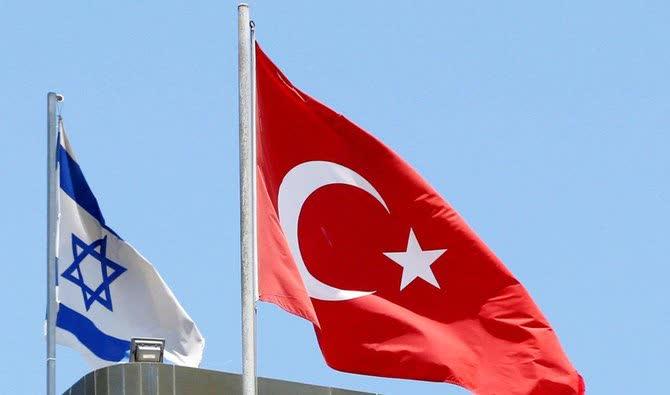 Accordingly, 68 percent are in favor of improving ties with Turkey, while 10 percent are against, compared to 50 percent in favor and 37 percent against among Israel’s Jewish population

ANKARA: Despite the decline in Turkish-Israeli relations over the past decade, Israeli public opinion is increasingly supportive of an improvement in ties between the two countries.
According to the 2019 Israeli Foreign Policy Index by the Mitvim Institute of Israel, 53 percent of Israelis believe that Israel should try to improve relations with Turkey, compared to 32 percent who disagree.
This points to an almost 10 percent increase compared to the previous year, in which 42 percent of respondents said that Israel should work to improve its relationship with Turkey and 45 percent said it should not.
The respondents were also asked whether Israel should prioritize developing relations with democratic countries or should not take regime type as a criterion; both choices were indicated by 40 percent of participants. It is the seventh edition of the survey.
In an exclusive interview with Arab News, Nimrod Goren, head of the Mitvim Institute, said the fact that a majority of Israelis stated in the annual poll that they would like it to improve relations with Turkey is in contrast to the policies of Prime Minister Benjamin Netanyahu’s government and the rhetoric of his main opposition party.
“This is surprising, as the poll findings reveal that on most issues the public accepts the framing provided by the Israeli leadership on foreign policy issues,” he said.
According to Goren, the findings may reflect a “realpolitik” tendency by the Israeli public to seek better relations with countries that project power and influence in the region, even if there are differences in values and policies.
“The finding also reflects the resilience of Israel-Turkey ties. Despite deep political tensions and public grievances, there is still a basic positive attitude toward Turkey as a country, which can be leveraged,” he said.

The respondents were asked whether Israel should prioritize developing relations with democratic countries or should not take regime type as a criterion; both choices were indicated by 40 percent of participants.

Historically, bilateral relations between the two countries have been at their peak when they perceived a common threat or had a common ally — such as in the 1990s over similar concerns about the existential threat from Iran, when Turkey and Israel cooperated in joint military exercises and training of officers. But ties hit a low in May 2010 after a raid on the Gaza Freedom Flotilla in international waters by Israeli Defense Forces commandos, which killed 10 Turkish citizens.
A reconciliation followed after Netanyahu apologized for the incident. Although diplomatic relations were restored in 2016 to the ambassadorial level, Turkey dismissed Israeli’s ambassador after its security forces killed dozens of Palestinian protesters in Gaza in May 2018. But, for Goren, relations between Israel and Turkey should not be viewed only through the prism of relations between their current leaders.
“The business community and civil society also play a role, and a more positive one than the political level. It is noteworthy that among the Israeli public, the largest support for improving ties with Turkey is found among Israel’s Arab citizens,” he said.

Accordingly, 68 percent are in favor of improving ties with Turkey, while 10 percent are against, compared to 50 percent in favor and 37 percent against among Israel’s Jewish population.
Despite the diplomatic stalemate, trade between the two countries exceeded $8 billion in 2018. Turkish Airlines operates 10 daily flights on the Tel Aviv-Istanbul route, with growing demands for tourist destinations in Turkey such as Antalya.
Esra Cuhadar, an expert on conflict resolution and political psychology from Bilkent University in Ankara, said that social and cultural bonds develop independently from bilateral diplomatic relations, and can sometimes trigger grassroots change in perceptions about another country.
“Israel and Turkey are located in the same geographic region, and the people from two countries have various avenues for social contact which decreases inevitably the stereotypes and the bias,” she told Arab News.
Cuhadar, however, said that any improvement in bilateral relations is closely connected with who is ruling in both countries.
To have social rapprochement translated into improving diplomatic channels, it is necessary that the governments in both countries do not use bilateral disagreements to whip up nationalistic sentiment and consolidate its national constituencies.
The picture is less rosy on Turkish side. In a survey conducted last year by Istanbul Bilgi University, “Dimensions of Polarization in Turkey,” 14 percent of Turkish respondents considered Israel as the second largest threat after the US (54.3 percent).