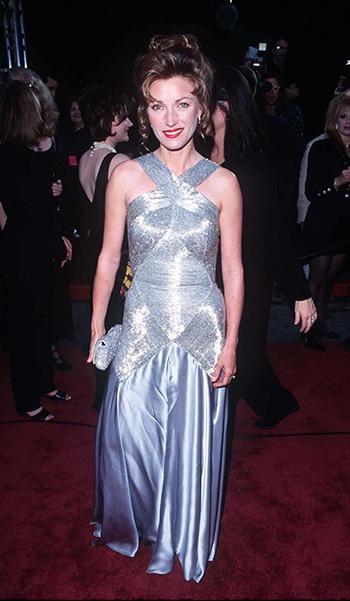 As told to Leah Harper-  The  Guardian

Jane Seymour wearing a Nolan Miller dress she acquired in her role in the TV show Crossings. Photograph: SGranitz/WireImage

This dress was created for [the 1986 TV mini-series] Crossings, which was based on a Danielle Steel novel, but I also wore it to the People’s Choice awards in 1996. In those days, it was part of my contract that I was given all the costumes, so I had an amazing collection. Crossings was costumed by Nolan Miller, who was famous for designing the clothes for Dynasty. I was playing a very glamorous character and was going for that Rita Hayworth look. Around that time, actresses, instead of models, started showing off the fashion of the era. Unless you are a model, it’s not something you’re really equipped to do but, when you put a gown like that on, you become a character, even on the red carpet. You can’t come in like a church mouse.

Nolan became a personal friend of mine – he knew that I used to design and make all my own clothes, so we collaborated on my costumes. When I was younger I didn’t have any money so I’d buy good fabric from Liberty – the offcuts that nobody wanted – or I’d go to vintage stores, bring-and-buy sales or church sales, and turn them into outfits for myself.

I was never paid by a designer to wear anything, although nowadays not every designer will dress someone my age. I don’t care whether re-wearing clothes is acceptable or not – if I’m feeling the dress and the occasion, and if it fits, then I’ll wear it again.

In the 80s, Escada loaned me a lot of gowns – I was the unofficial muse of Brian Rennie, the designer. Gianni Versace used to lend me gowns that were made for Donatella because we were the same size. One was a beaded, all-in-one that you thought you could see through, but really you couldn’t. Although, if you looked carefully, maybe you could! My boyfriend at the time, who was a famous rock’n’roller, had just broken up with me. We went to an event together and I thought: ‘Dammit, I’m going to wear it’ – and it worked. Everyone was trying to give me their phone number and I was like: ‘OK, bye-bye!’ But I have to admit that, looking back, I can’t believe I wore it.