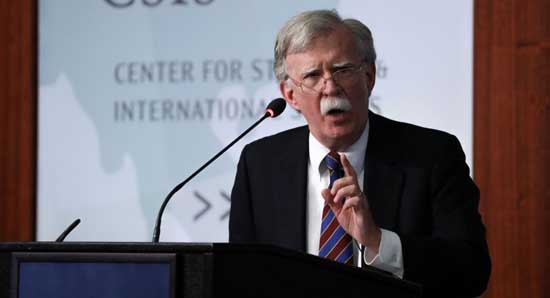 According to six people, Bolton also questioned the merits of Trump applying his business acumen to foreign policy, saying such issues can’t be approached like the win-or-lose edict that drives real estate deals: When one deal doesn’t work, you move on to the next.

Bolton suggested that Trump believes his personal chemistry with foreign leaders, including Turkish President Recep Tayyip Erdogan and North Korean leader Kim Jong-un, means that the US relationship with those countries is a positive one, a source who was in the room during the speech told Axios.

Bolton was especially critical of Trump’s handling of US policy toward Turkey, telling the private gathering of Morgan Stanley’s largest hedge fund clients that the president’s approach does not align with that of any of his advisers. He also criticized Trump’s resistance to bipartisan support in Congress for sanctions on Turkey after Erdogan purchased the Russian S-400 missile system.

The former national security adviser expressed concern that if re-elected, Trump could withdraw the US from NATO and other international alliances, following the isolationist foreign policy positions of people like Sen. Rand Paul.

Bolton was also was critical of Jared Kushner and Ivanka Trump, suggesting he doesn’t take them seriously. However, he said, they may convince the president to nominate a liberal to the Supreme Court in an effort to show they have real influence.