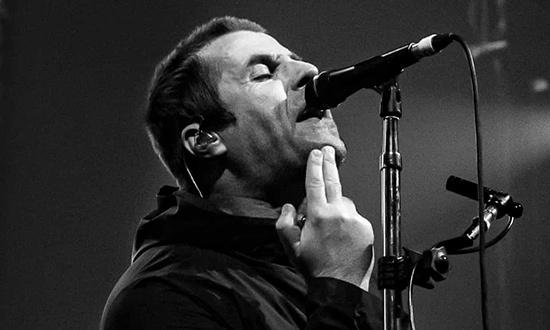 Motorpoint Arena, Cardiff
His band are well-drilled and Liam’s sneering vocals are on point, but there is a gulf between his solid solo songs and the era-defining work of Oasis

The chants start early. Barely a moment after support act DMA’s have left the stage, they ricochet off the girders crisscrossing the ceiling: “Liam! Liam! Liam!” By the time the final on-stage checks have been completed, the crowd is losing its collective mind as the Stone Roses’ I Am the Resurrection thunders from the PA. And if anyone can capitalise on such an atmosphere, it’s Liam Gallagher.

Loping on from the wings as Oasis instrumental Fuckin’ In the Bushes roars, he does precisely that. Opener Rock ‘n’ Roll Star is the perfect encapsulation of the younger Gallagher’s snotty charm – cocky, aspirational, and capable of delivering the euphoria of its premise in real time – and as he nails its chorus the room comes unglued. Coat on, and with hands inevitably clasped behind his back, he eyeballs the front row with aggro cool, accruing a set’s worth of momentum in five minutes.

But, without ever entirely losing sight of that benchmark, the pace is then frequently allowed to drop. Gallagher’s vocals are strong, mainlining that bullish rasp even in the show’s quietest stretches, and his band are well-drilled, but the core issue is not one that can be remedied on the fly. The tug of war at the heart of his solo career is between his workmanlike new material and his willingness to return to the well of Oasis. As a result, tonight’s running order is dotted with era-defining rock songs written by his estranged brother Noel that loudly undermine solid selections from his own albums As You Were and Why Me? Why Not.

The rousing singalong that greets For What It’s Worth elevates it from saccharine single to communal outpouring, but it is upstaged when Gallagher introduces Oasis guitarist Paul “Bonehead” Arthurs for a resplendent charge through Morning Glory. Similarly, Wall of Glass and Be Still, two examples of Liam’s patented “chin-out music”, aren’t able to make the desired headway thanks to a muddy mix. The crowd’s flashes of rebellion – pints thrown, fags smoked, flares lit – are scattered, adding to the feeling that this occasion is not as dangerous or edgy as it initially purported to be.

It is the vocalist’s privilege to rarely find themselves stranded following the dissolution of their band. But, equally, the ready availability of former glories must be weighed against the need to move on. In that sense, this tour is unusual as both artist and crowd would probably prefer to be doing something different with their time: Gallagher fronting Oasis, and the fans watching Oasis. It’s unlikely that any solo work, no matter its quality, could emerge unscathed from such a challenging environment. The maudlin Once seems to accept that, and there is insight to match the power in its thudding second verse: “I think it’s true what they say, that the dream is borrowed / You give it back tomorrow, minus the sorrow.”

Intriguingly, there are few concessions to Gallagher’s beef with his brother. One is a bait-and-switch that finds Liam’s son, Gene, introduced to play percussion with the line: “Two Gallaghers for the price of one, our kid on the bongos.” Another arrives with the first song of the encore. The Oasis B-side Acquiesce is a vanishingly rare recorded example of the brothers sharing lead vocals, and in the space where Noel’s soaring chorus is supposed to hit, the crowd picks up the slack at Liam’s request. “I’ve got loads of brothers and sisters down there,” he says in a telling, surprisingly emotional, aside.