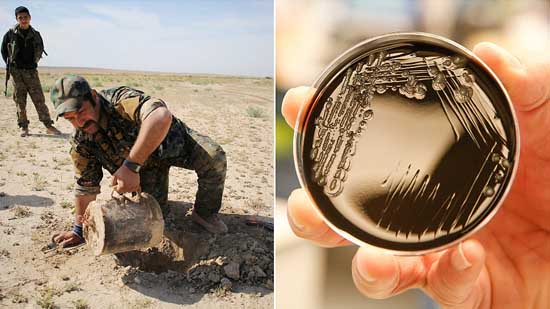 In an idea seemingly pulled from dystopian science fiction, the Pentagon has teamed up with Raytheon to develop a system capable of delivering genetically modified bacteria underground. For purely defensive purposes, of course.

The first of the two strains, known as a “bio-sensor,” will “detect the presence or absence of explosives buried underground,” while the second will produce a “glowing light” in the event such materials are found. Remotely operated cameras or drones would then be sent to survey the area to find the glowing germs, and ultimately the buried explosives.

“We already know that some bacteria can be programmed to be very good at detecting explosives, but it’s harder underground,” said Raytheon researcher Allison Taggart.

We’re investigating how to transport the reporting bacteria to the required depth underground.

While it is supposedly intended to detect buried improvised explosive devices in foreign warzones, Taggart did not hide that the “modular design” of the bacteria-delivery system and swappable “components” inside will allow for other applications “as needed.”

Though the Pentagon claims it only plans to use the system for “defensive” purposes only, some may find the idea of militarized microbes off-putting – conjuring apocalyptic scenarios of a runaway genetically engineered superbug.