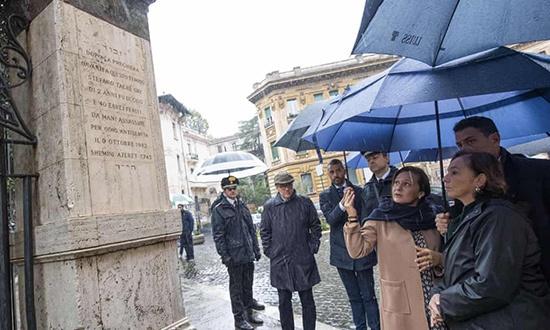 More than half of the Italians surveyed in a recent poll have said that racist acts were either sometimes or always “justifiable”, a finding that comes after a series of high-profile racist and antisemitic incidents across the country.

The polling firm, SWG, questioned a sample of 1,500 people of whom 10% said racist acts were always justified and a further 45% who said racist acts could be acceptable depending on the situation.

The remaining 45% said racist acts of any kind were completely unacceptable.

SWG conducts the same survey once a year and for the first time in a decade the majority of those questioned did not condemn racism outright.

“What this means is that there has been a relaxation in attitudes towards racism – not necessarily that people have become racist, more that they are becoming more accepting of racist acts and do not consider them so scandalous,” said Enzo Risso, scientific director at SWG.

He added that the change in attitude was partly due to the proliferation of online hate speech.

“We can say anything about anyone and are becoming more used to it,” said Risso. “This is a bad sign from a civic point of view. It’s not only in Italy … what we’re seeing in other countries too is a sort of adaptation towards the worst.”

On Monday night, thousands of Italians converged in the rain at Milan’s central station in support of Liliana Segre, a Holocaust survivor who was last week assigned a police escort after a surge in the number of online threats, many against her life, she receives from far-right extremists.

Segre, a senator for life, gets an average 200 online threats a day and the situation worsened after her proposal to establish a commission to combat racism, antisemitism and incitement to hatred was passed by the government. All parties backed the proposal apart from the far-right League, its smaller ally, Brothers of Italy, and Silvio Berlusconi’s Forza Italia.

Segre was 13 when on 30 January 1944, along with several other family members, she was deported to Auschwitz from platform 21 at Milan’s central station.

Racist chanting also continues to blight Italian football at all levels, with Mario Balotelli a target during a recent Serie A game between his team, Brescia, and Verona.

The League and Brothers of Italy continuously campaign on an “Italians first” platform, never publicly condemn racist acts and, on occasion, sue people who accuse them of being racist for defamation.

Matteo Salvini, the former interior minister and leader of the League, last year filed a case against the black former senator Cécile Kyenge, who has suffered several racist attacks from League politicians.

Polling at 34.5%, the League is the biggest party in Italy, while support for Brothers of Italy is on the rise.

Last week two Brothers of Italy members toured a council housing block in Bologna to show the number of foreigners living there in an attempt to highlight their belief that Italians were being penalised in the housing system. “They will say that we are violating privacy, but we do not care,” the pair said in a live video on Facebook.