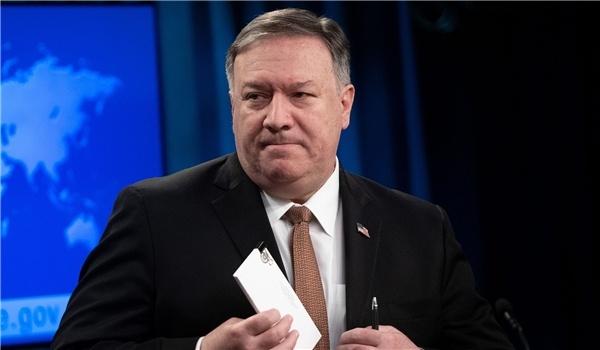 TEHRAN (FNA)- US Secretary of State Mike Pompeo seized the occasion of commemorating the fall of the Berlin Wall to mount attacks on Iran, China and Russia.

He was speaking in Berlin a day before the 30th anniversary of the fall of the Berlin Wall. Referring to that event, Pompeo said, “The West – all of us – lost our way in the afterglow of that proud moment”. He said the US and its allies should “defend what was so hard-won… in 1989” and “recognise we are in a competition of values with un-free nations”.

Pompeo’s remarks are full of Cold War mentality. His hysterical remarks are the latest move after a series of high-profile attacks on Iran, China and Russia by top US officials, where ideology is being used as a weapon to smear their political systems as well as their domestic and foreign policies.

By differentiating between their peoples and their governments, he intends to sow division in these countries. It is a shrewd but self-defeating move. But compared with the US, which is bent on bringing Iran, China and Russia down at the expense of their peoples, it is these governments that have served as the representatives and guardians of the national interests of their peoples.

Since the isolationism, protectionism and unilateralism of the current US administration have tarnished the US’s reputation in the world, the US desperately needs to build an international coalition with “like-minded states” against a common “enemy.”

By simplifying the US relations into an opposition between “democracy” and “authoritarianism” and a “competition of values,” he also tried to mobilize domestic support for strategic US competition against Iran, China and Russia. In fact, the US is undergoing an internal crisis of its democratic system. By demonizing these countries, populist politicians can divert attention away from more pressing domestic problems.

What is disturbing is that the new “China threat” narrative seems to have shifted from military and economic competition to ideological rivalry, reminiscent of the “Loss of China” debate in the 1950s, which gave rise to the notorious “McCarthyism” movement.

But these allegations are outrageously ungrounded. China has long been a responsible citizen of the international community, never harbored any intention to change others and will never allow others to change China. China has a culture of peace, inclusiveness and harmony, which has played a positive role in maintaining the long peace after the end of the Cold War.

The same argument could be made about Iran and Russia which are under US sanctions and restrictions. They too are responsible members of the international community that have never tried to attack or threaten other nations.

On the contrary, it is the US that is fervently spreading its ideology to the outside world and forces regime changes in the name of ideology. The whole debate on whether the “engagement” policy toward Iran, China and Russia failed is based on the assumption that engagement would change them into the US’s image. But such Western-centric assumptions are condescending and hypocritical. In this sense, the US has never given up its ambition to force some form of regime change in Iran, China and Russia.

With the 2020 US presidential election around the corner, it can be expected that more of these attacks will come. But eventually, Washington will come to realize that it needs to make hard choices to fend off the risk of escalating ideological rivalry and further isolation.

First of all, it needs to choose between diversity and uniformity. The “end of history” euphoria after the end of the Cold War has been proved to be illusory. With the rise of the rest, the world is witnessing growing diversity with different political systems and cultural heritages. The democratization of international relations is also an irresistible trend. It is naive, useless and more importantly dangerous to try to return the world to uniformity.

Second, Washington needs to shift its strategy from confrontation to cooperation. In this increasingly globalized world, countries have become so interdependent that competition needs to be seen in a positive-sum instead of a zero-sum approach. Of course not the type of the so-called positive-sum nuclear deal with Iran that had been designed by the US to end up in a win-lose game only wrapped up in win-win paper.

Last but not least, the US needs to reshuffle its approach from the clash of civilizations to dialogue among civilizations i.e., multilateralism and the rule of international law.

The US will eventually come to learn these lessons after it finds itself overwhelmed by increasing costs and painful realities, if not now and specially in a Trump White House, in the next decade for sure. Time is a good teacher. Each day you may find more in the West, like the French president, who feel helpless to acknowledge this very fact that as the West is racing down the path of demise, Eastern nations like Russia, China, India and other civilizations are rising.

In fact, Iran, China and Russia share many common interests and values – unlike the US. This makes it even easier for them to resist the bully-boy member of the international community and its shenanigans under international law, which is increasingly more isolated than ever in this multilateral world.