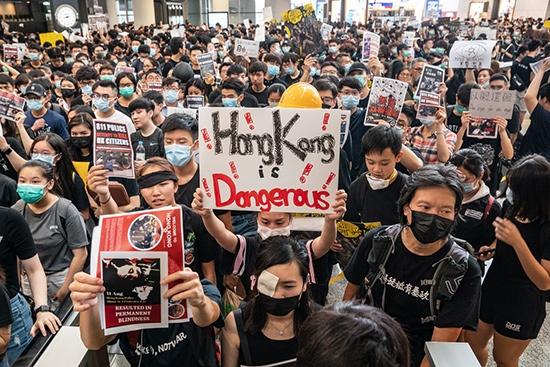 Lily Kuo in Beijing and agencies  – The Guardian

Police in Hong Kong have accused protesters of bringing the city to the “brink of total collapse” and urged residents not to support them as demonstrations paralysed the city for a second day in a row.

Clashes continued into the late evening, intensifying at universities, which emerged as new battlegrounds. Chinese University of Hong Kong, the site of hours of pitched battles between riot police and protesters, was engulfed in teargas as police fired volleys of rubber bullets, teargas and a water cannon on demonstrators.

Pro-vice chancellor of the university, Dennis Ng pleaded with police to stop firing: “It is out of control,” he yelled over a loudspeaker. The police later said they would retreat in an effort to “diffuse the situation”.

Tuesday’s protests came after violence reached a new peak on Monday in clashes in which at least 128 people were injured. The condition of a 21-year-old male student shot at close range by police in the torso was said to be improving but a 57-year-old man, seen arguing with protesters, who was doused in flammable liquid and set on fire, remained in a critical condition. Police made at least 280 arrests, most of them of students.

Residents described a city stunned by the previous day’s violence. “You had the feeling going out into the city this morning that the system is at the breaking point. The government and police can’t manage it,” said Kong Tsung-gan, a writer and activist.

In the afternoon, thousands of demonstrators, including black-clad protesters as well as what appeared to be office workers, converged on Hong Kong’s central business district and held up outstretched hands to signal their five demands.

Some crouched behind umbrellas in the business district, advancing toward riot police. After a crowd began to heckle officers, calling them “murderers” and “rapists”, in reference to a recent rape allegation made by a protester, police fired multiple rounds of teargas.

Riot police also fired teargas at protesters at two universities, as protesters lit barricades and set a car on fire. A spokesman for the city’s mass transit railway said demonstrators had thrown petrol bombs, bicycles and other objects on to the tracks at several stations, stopping some services. Several universities and some schools cancelled classes. At least eight have also suspended teaching on Wednesday.

Hong Kong has entered its sixth month of political unrest and observers worry it will only escalate further. More than 3,000 people have been arrested since the protests began in June, initially triggered by a bill that would have allowed the extradition of suspects in Hong Kong to mainland China.

At Hong Kong University, academics pleaded with student demonstrators to rethink their methods. “What is happening here is not sustainable,” said Matthew Evans, dean of the university’s faculty of science. “What happens is the police come. There is a fight. People get arrested. Then tomorrow it starts all over again … There’s not an end.”

On Tuesday, Hong Kong’s leader, Carrie Lam, called the protesters “extremely selfish” for paralysing the city. On Monday, she said they were enemies of the people and slammed “any wishful thinking” that their escalating tactics would push the government to accede to their demands.

But protesters say the government has refused to listen to the public, which has largely supported the protesters, who are demanding an independent inquiry into police behaviour as well as the implementation of universal suffrage.

The political crisis has entered a new phase since the death of a demonstrator on Friday who fell from a parking lot. It was the first death linked to police action.

Observers fear recent violence will push both sides to dig in further.

In a press conference, police said that almost 50 areas across the city had been affected by protests over the last two days. The police blamed protesters for pushing Hong Kong to the “brink of total collapse”.

“If anyone still finds excuses for the violence of rioters, we suggest they do some soul-searching,” said Kong Wing-cheung, head of the police’s public relations division. “You are indeed an accomplice.

“If anyone has any wishful thinking that they can achieve their so-called political demands by violence, please wake up.”

On Tuesday, the United States expressed “grave concern” over the situation and called for restraint by both the police and government and the protesters.

Beijing, which has authority over Hong Kong as part of the “one country, two systems” framework established when the former British colony was handed over to Chinese control, has signalled little willingness to compromise.

On Tuesday, the state-run Global Times described the protesters in Hong Kong as “no different from terrorists like Islamic State”. Addressing the Hong Kong police, the editorial stressed the readiness of the People’s Liberation Army and Chinese police to reinforce Hong Kong’s security forces when needed.

“Behind you are not only the people of Hong Kong and the whole country who love Hong Kong, but also the national armed police force and the troops stationed in Hong Kong.”