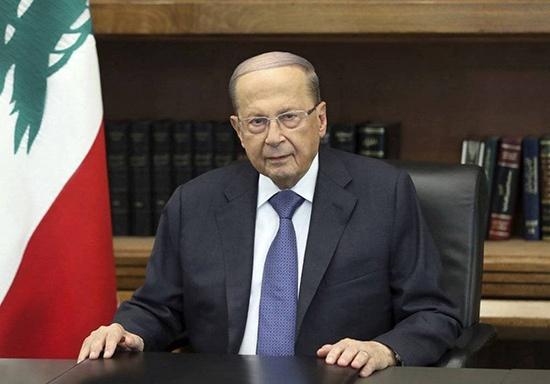 Protesters seemingly took offense at a number of his comments, labeling them as insensitive.

Despite the assurances, protesters took to the streets and blocked roads as soon as his conversation with journalists came to a close. Protesters seemingly took offense at a number of his comments, labeling them as insensitive.

Aoun had insisted that decent and honest individuals public office still exist, with good faith necessary to lay the foundation of a functioning government.

“If people aren’t satisfied with any of the decent leaders let them immigrate,” Aoun said, This drew the ire of protesters, who promptly blocked roads and main highways linking Tripoli to Sidon.

His comments, although ill-advised, were swiftly taken out of context.

Although protesters have been demanding a fully independent government made up of technocrats, Aoun signaled that the government will most likely be a “techno-political one.”

Aoun said discussions over the makeup of the new Cabinet are still ongoing, hinting that Prime Minister Saad Hariri has yet to agree to head a government that includes traditional political parties.

He also confirmed that parliamentary consultations would begin this week but left the door open for “delays as we are still awaiting answers from certain parties.”

“We want a government that is united, not divided,” Aoun said.

Earlier on Tuesday, thousands of protesters have blocked roads and state institutions as demonstrations entered their 27th day in a bid to force officials to capitulate to their demands.

Protesters have been calling for the formation of an independent technocrat government made up of leading experts but have been rebuked by Hezbollah and the Free Patriotic Movement to a lesser extent.

Schools, universities and banks went on strike Tuesday as students threatened to boycott classes and exams. Bank employees, meanwhile, have reported security concerns after being faced with enraged customers looking to access their deposits.

In response, the Syndicate of Bank Employees announced an open-ended strike until normalcy is restored.

“We want to thank all the employees for their dedication the past two weeks under harsh and stressful conditions,” a statement by the Association of Banks said.

Banks’ ATM machines in Beirut and other areas will be stocked despite the closure, President of the Federation of Syndicates of Bank Employees George al-Hajj told Reuters.

On Monday, Central Bank Governor Riad Salameh maintained that mechanisms are put in place to safeguard the Lira peg and deposits, dismissing concerns of a possible devaluation or haircut.

“The Central Bank cannot impose capital controls or haircuts and will not push for that,” Salameh said.

Protesters have gathered in front of a number of institutions, including the state-owned Touch and Alfa telecom providers, Electricite Du Liban and the Central Bank. Major roads in Akkar, Tripoli and Sidon were also cut off. In front of the Judicial Palace, protestors asked judges to remain neutral and look into corruption allegations.

Lebanon has been rocked by nationwide protests over a financial crisis not witnessed since the end of its civil war in 1990. Rising unemployment, estimated at around 35 percent, coupled with scare dollar liquidity and the lack of basic services, have exasperated the animosity felt toward the ruling political class.

Despite Foreign Minister Gebran Bassil seemingly willing to step aside, sources say that Hezbollah continues to push to be represented in the new Cabinet for fear of being undercut from within which could threaten its military arsenal.

Speaking Monday, Hezbollah leader Hassan Nasrallah upped the ante, launching a barrage aimed at the U.S who he accuses of orchestrating the current economic and political turmoil.

“We will stand up to the U.S and tell them to leave us alone,” Nasrallah clamored before being met with chants of “death to America” by his supporters.

Nasrallah refused to elaborate on his party’s stance on the government negotiations, suggesting that talks are ongoing.

“When it comes to the government formation … the meetings are ongoing and the discussions are underway in the country,” he said. “I will not discuss this matter … and we will leave the door open.”

Late last week, the World Bank urged Lebanon to form a new Cabinet “within a week” to prevent further degradation and loss of confidence in its economy, warning of grave risks to the country’s stability amid a worsening fiscal and economic crisis.

With the clock ticking and three days left before deadline expires, President Michel Aoun met Tuesday with ambassadors and representatives of the International Support Group which brings together the United Nations, the governments of China, France, Germany, Italy, Russia, the United Kingdom and the United States, along with the European Union and the Arab League.

During his sitdown with Arab ambassadors, Aoun pleaded with them for support to “revive Lebanon’s economy,” according to a statement issued by his office.

Attempts to secure financial assistance from Gulf allies have so far come up short despite Hariri’s visit to the UAE last month to take part in an economic conference.

The lone neighbor to offer some sort of support is Qatar, who bought some Lebanese government bonds as part of a planned $500 million investment to support its struggling economy as a token gesture in June.

Saudi Arabia, a long-time backer of Hariri that’s spent billions in Lebanese investments, has also withheld support as the influence of Iranian-backed Hezbollah over the government grew.