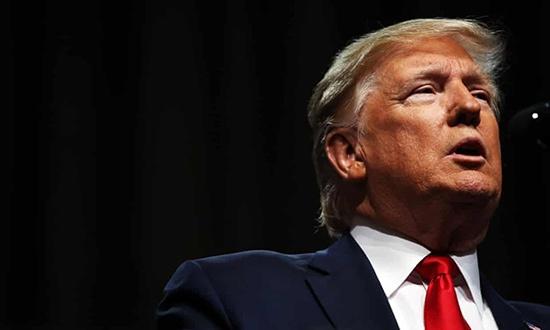 Only three times in the history of the American republic has Congress initiated public testimony that could result in the removal of the president by impeachment. The tally will rise to four on Wednesday.

On the eve of public hearings, television crews moved into the halls of the Capitol in Washington, the parties distributed strategy memos and the House intelligence committee prepared to cross-examine its first two witnesses.

Democrats allege that Donald Trump engaged the power of his office in an attempt to extort from Ukraine an announcement about investigations of Joe Biden, a domestic political rival, and 2016 election tampering.

Trump’s defenders argue that Trump is the victim of an attack by “unelected and anonymous bureaucrats” who disagreed with unorthodox foreign policy decisions.

At the center, of course, is Trump, who has demanded Republicans defend his conduct as unimpeachable not only in the constitutional sense but as unimpeachable, period. As the first public testimony approached, Trump grew increasingly tetchy on Twitter: “A total Impeachment Scam by the Do Nothing Democrats!”

Corey Brettschneider, a professor of constitutional law at Brown University, called it “maybe one of the most important moments in American history”.

“This is only the fourth time that we’ve gotten this far, with a formal process happening,” Brettschneider said. “And I’d say in some ways, it’s among the most serious of alleged offenses.”

On Tuesday, both parties scrambled to coordinate strategy, pre-empt arguments by the other side and control the stagecraft. As the majority in the House, the Democrats have basic control of proceedings, including the witness list.

The first two witnesses scheduled to testify on Wednesday are William Taylor, the acting ambassador in Kyiv who told investigators in closed-door hearings Trump “was adamant” about the need for a public announcement of investigations by the Ukrainian president, Volodymyr Zelenskiy; and state department deputy assistant secretary George Kent, who said Trump “wanted nothing less than President Zelenskiy to go to a microphone and say ‘investigations’, ‘Biden’, and ‘Clinton’”.

Clinton was a reference to a conspiracy theory about 2016 election tampering that Trump credited, witnesses have said.

A third witness, the former Ukraine ambassador Marie Yovanovitch, was to testify Friday. The intelligence committee announced late on Tuesday that an additional eight witnesses, including almost every witness to have been deposed behind closed doors, would be called to appear in public next week.

Jockeying over testimony continues: on Tuesday the White House acting chief of staff, Mick Mulvaney, became the latest senior Trump aide to say he would defy a congressional subpoena. Public testimony is expected to last about two weeks. After that, the House is expected to hold an impeachment vote. If Trump were impeached, requiring a straight majority, the proceedings would move to the Senate, where a two-thirds majority vote would remove Trump from office.

In the most recent presidential impeachment, in 1998, Bill Clinton was impeached in the House but acquitted in the Senate, and remained in office.

Adam Schiff, the chairman of the intelligence committee, sent colleagues a memo on Tuesday reminding them that the impeachment hearings were “a sober and rigorous undertaking”.

“The hearings will be conducted in a manner that ensures that all participants are treated fairly and with respect, mindful of the solemn and historic task before us,” Schiff wrote.

He told colleagues he intended to turn over a significant portion of his time for questioning to a committee lawyer, Daniel Goldman, a former federal prosecutor with experience in cases on organized crime.

The Republicans circulated a memo of their own, laying out talking points for defending the president. Trump’s “state of mind” during a 25 July phone call with Zelenskiy in which he said “the United States has been very very good to Ukraine” and then asked for a “favor” was not cued to his own personal political interests, the memo argues, but to corruption in Ukraine.

The memo also urges Republicans to argue that “the evidence gathered does not establish an impeachable offense”.

Democrats argue that Trump’s actions amounted to an abuse of power falling within the category of “high crimes and misdemeanors” mentioned in the constitution as grounds for impeachment. The phrase was borrowed from British law, said Brettschneider, and “referred to the idea of an abuse of power”.

“I’d say there certainly is enough evidence already to show that Trump has committed a high crime and misdemeanor,” he said.

While members of Congress will vote on impeachment, precedent indicates that Trump’s political fate, even before the 2020 election, lies in public opinion. Televised hearings in the impeachment proceedings against Richard Nixon quickly swung public opinion against him, causing Republicans to pressure him to resign, Pew Research has noted.

In his memo, Schiff seemed conscious that the goal of televised hearings was to present the case to voters with a minimum of partisan sniping that could cause viewers to write off the proceedings as another Washington melodrama.

“Like the depositions preceding them,” Schiff wrote, “these hearings will address subjects of profound consequence for the Nation and the functioning of our government under the constitution.”

Refugees arriving in US unlikely to exceed cap set by Trump