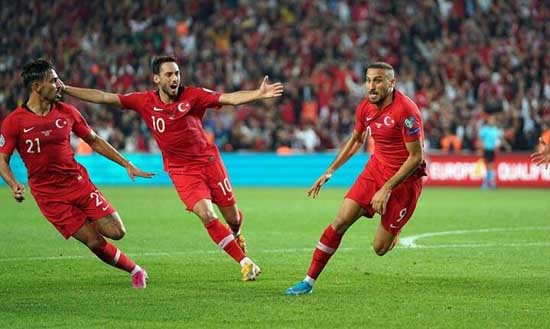 The Turkish national football team aims for a victory against Iceland on Nov. 14 to claim a spot in this summer’s Euro 2020 finals.

Group H leader Turkey will grab the ticket even if it is held to a draw against Iceland in Istanbul’s Türk Telekom Arena, while the visiting side definitely needs a win to keep its hopes of advancing alive.

Turkey is currently in the first spot in qualification group with 19 points, ahead of France on a goal difference, with one more game left at Andorra after the Iceland clash.

Turkey coach Şenol Güneş believes that winning a spot in the Euro 2020 finals is much more important than finishing as group leader.

“We are in the homestretch, and we want to take a good final step,” Güneş told reporters following a training session on Nov. 11.

“Iceland, along with France, have been our strongest rivals in the group. With only two games to go, we want to grab all six points available. But in the worst case scenario, a draw at home will guarantee our place in the finals. Since our main target is a spot in the Euro 2020 finals, even a draw will be a good result for us.”

Despite the upbeat mood in the country about Turkey’s chances of advancing, Güneş noted that nothing has been won yet.

“The relaxed mood of our supporters is probably related to their confidence in the team,” he said. “We should definitely be in the finals after coming this far, we should not miss the chance, but you cannot win a game before playing. We believe in ourselves, but we also know that we have two more games ahead.”

Güneş added that Iceland will not be an easy opponent.

“We will relax when the game is over,” he said. “We must be the more aggressive side. We want to advance from the group by winning against a team that beat us there.”

Güneş was referring to the game on June 11 in Reykjavik, which the home side won 2-1. Iceland has won the two sides’ last three meetings and eight of the 12 previous games they played, losing only two.

Turkey’s closest rival in the group, France, is also a hair’s breadth away from the main tournament.

“Les Bleus” might qualify before they even take the field against Moldova at the Stade de France on Nov. 14.

Didier Deschamps’ world champions will take their place at the finals should Iceland not win in Turkey, although a win for France over bottom side Moldova would be enough regardless of what happens in Istanbul.

Elsewhere on Nov. 14, England can rubber stamp what has long looked to be certain qualification with a draw over winless Montenegro at Wembley, with Gareth Southgate’s side another one pushing young players to the forefront.

Raheem Sterling will not play following a brief spat with Joe Gomez in the wake of Liverpool’s 3-1 win over Manchester City, although Southgate insisted a line had been drawn under the incident.

“I love all of my players,” Southgate said. “We are like a family, and all families have disagreements.”

Reigning European champion Portugal, meanwhile, will have the chance to defend its title with a win over Lithuania, which has collected just a point from seven Group B games, if Serbia fails to beat Luxembourg.

The Portuguese are a point ahead of the Serbs as coach Fernando Santos recalls Lokomotiv Moscow forward Eder, whose goal won Euro 2016, with teenage star Joao Felix sidelined.