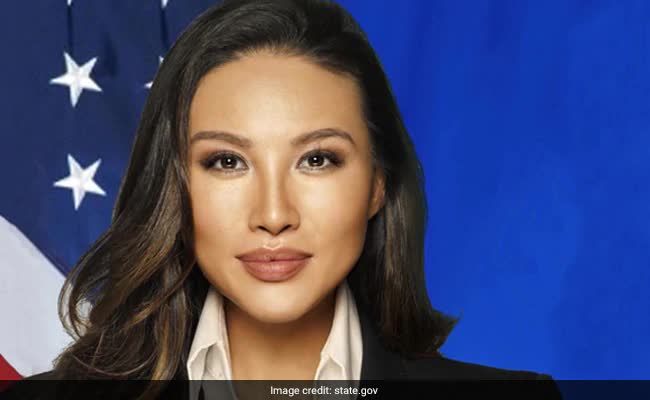 Mina Chang, the 35-year-old Donald Trump appointee, embellished her work history and made misleading claims about her professional background.

Mina Chang sports a subtle smile on the cover of a Time magazine “Special Edition,” with a swaggering headline that reads, “We change the world: Modern humanitarian in the digital age.”

The cover shot was among the photographs Chang brought to a January 2017 interview ostensibly about countering violent extremism. At the time, the current State Department senior official was the chief executive at a small nonprofit, and she appeared on the public affairs show to discuss efforts to curb the influence of groups like the Islamic State and Boko Haram.

But five minutes into the interview, the show’s host suggests that they “take a look at some pictures you brought with you of your work around the world.”

“Here you are on Time magazine, congratulations,” the host, Mary Sit, said to Chang. “Tell me about this cover and how this came to be.”

Chang explained that her organization used “drone technology in disaster response” and “I suppose I brought some attention to that.”

What she did not say, however, is that the cover was fake.

The fabricated Time cover is just one in a string of Chang’s listed accomplishments and resume line items that has come into question after an NBC News investigation found that the 35-year-old Trump appointee embellished her work history and made misleading claims about her professional background. It has been a persistent problem for President Donald Trump’s administration: an apparent failure to recognize red flags when vetting potential hires and appointees.

Last year, The Washington Post reported the story of a 24-year-old former Trump campaign worker who was quickly promoted to a leading role in the White House’s drug policy office. Taylor Weyeneth was quietly fired after The Post story cast doubt on his qualifications

In August, Trump withdrew his nominee for director of national intelligence, Rep. John Ratcliffe, R-Texas, saying the embattled pick had been treated “very unfairly” by the media. Ratcliffe had bragged that as a federal prosecutor he “arrested over 300 illegal immigrants on a single day.” But, The Post reported then, that wasn’t true.

After he announced the change of plans, Trump defended the White House’s failure to scrutinize Ratcliffe’s background.

“I give out a name to the press and they vet for me,” Trump said. “We save a lot of money that way.”

The latest round of media vetting, then, turned up several more problematic claims, this time from Chang, who began working at the State Department in April. At one point, she was up for a more senior post at the United States Agency for International Development’s Bureau for Asia, but in September, her nomination was withdrawn without explanation.

Officials at the White House and the State Department did not respond to requests for comment, or to questions about Chang’s purported qualifications. It’s unclear whether Chang has the top secret security clearance typical for an official of her level.

In her State Department biography, which appears to include the same photograph used in the doctored Time cover, Chang claims that she is “an alumna of the Harvard Business School” who has “addressed the Republican and Democratic National Conventions.” A similar bio appears on the website of the think tank New America, and she also used her LinkedIn and Twitter accounts for self-promotion – but by Tuesday night, both were offline.

The program’s website boasts that graduates of the course “will become a lifetime member of the HBS alumni community” but Kenny said it is “not on the same footing as an MBA.” Last year, the school’s acceptance rate for its MBA program was 11 percent, Kenny said. But the Advanced Management Program is open enrollment. As long as an applicant’s employer sponsors them, and the firm can meet certain standards and foot the $82,000 fee, the person is admitted.

He said the proper way to list such an experience on a resume would be to declare oneself “an alum of the Advanced Management Program” and then note the year the course was completed. In her bio, Chang was not specific.

Her claims about speaking to the Republican and Democratic National Conventions also seem to be false or misleading. She did address the Global Oval, an international affairs policy summit convened during both conventions in the cities where they were held.

However, those were not convention-sponsored events, confirmed a representative for one of the organizations that put them together. Speaking there would not be considered addressing the convention, the representative said.

Chang also exaggerated the scope of her nonprofit’s work, NBC News reported. In public appearances, she claimed Linking the World operated in dozens of countries and impacted thousands of people. But her organization’s tax filings don’t contain concrete information about overseas projects and show a budget of less than $300,000 with a handful of staff, according to NBC News.

The president himself has overstated – often to an absurd degree – everything from his personal wealth to his charitable giving and his own IQ.

And in June 2017, half a year after Chang debuted her cover story, The Post found that Trump had his own fake copies of Time magazine – on display in at least five of his golf clubs.