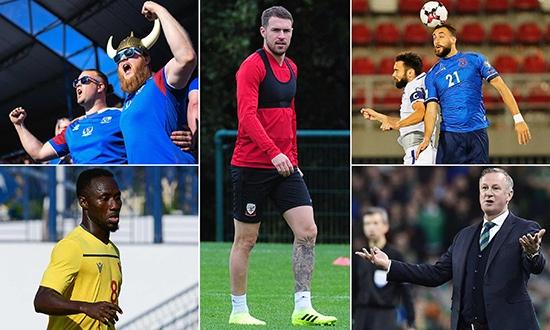 Aaron Ramsey returns to Wales after a year out, Naby Keïta must step up for Guinea and Iceland will face a frosty reception

(Clockwise from top left) Iceland will be up against it in Turkey, Aaron Ramsey returns for Wales, Kosovo’s key man could be Atdhe Nuhiu, Michael O’Neill bids farewell and Guinea look to Naby Keïta. Composite: Getty, EPA

The build-up to Wales’s remaining qualifiers has been dominated by the dismay that Gareth Bale’s call-up has caused at Real Madrid, where the forward has been on the sidelines for a month nursing a calf injury. Bale’s late winner against Azerbaijan in September proved how influential the forward can be in swinging matches Wales’ way but the returning Aaron Ramsey may be just as important for Ryan Giggs. The Juventus midfielder has been absent for Wales for a year so his return now, with two must-win games ahead, could not be better timed. Having just returned to fitness after an injury-hit start to life in Turin, he is beginning to find form again and will be vital as Wales look for the Group E win they need to set up a do-or-die final qualifying match with second-placed Hungary. GB

2) A hot reception in Turkey for ‘disrespectful’ Iceland

Iceland travel to the Group H leaders knowing they need a win to stay in contention for automatic qualification. In ordinary circumstances there would be a hostile atmosphere for a visiting nation with an outside chance of preventing Turkey from qualifying for only their third major tournament finals since 2002. However, on the eve of the qualifier in Iceland last June, Turkey players were held for almost four hours at Keflavík airport, where they were subject to bag searches that they felt were unnecessary. The captain, Emre Belozoglu, then had a washing-up brush held out to him in place of a microphone by a reporter as he spoke about their ordeal. Turkey’s president Recep Tayyip Erdoğan’s spokesman accused Iceland of “disrespect” and a day later the Turkish team, perhaps rattled by the experience, suffered their only qualifying defeat. Turkey’s players – and fans – will need little motivation to turn the heat up. GB

3) Kosovo turn to Nuhiu in quest for glory

On Sunday England will receive a rapturous welcome in Kosovo, where appreciation for the UK’s role in the conflict of the late 1990s runs deep. It should be a joyous occasion but there is every chance it will have an added edge. If Kosovo avoid defeat against a resurgent Czech Republic on Thursday, they will go into the England game with a tantalising opportunity to qualify directly for Euro 2020. Their job is made more difficult by the absence of one of Europe’s most in-demand strikers. Fenerbahce’s Vedat Muriqi, who has 10 goals already for club and country this seasonhas an ankle injury that rules him out of both games, so their manager, Bernard Challandes, must pick a plan B. That could well be the towering Sheffield Wednesday striker Atdhe Nuhiu, a cult figure at Hillsborough even if his scoring figures are patchy. Could he be the unlikely hero of Kosovo’s bid for a fairytale qualification? NA

Michael O’Neill’s first match in charge of Stoke ended with the club scoring four goals for the first time in four years; this week he returns to the job where he has been inspiring extraordinary feats for a long time – but the greatest yet would be to beat the Netherlands and/or Germany to automatic qualification for Euro 2020. Northern Ireland face both in the next week, starting with the Dutch. They know they can trouble their illustrious opponents, having been level with them until stoppage time when they met in Amsterdam last month. The Netherlands ultimately prevailed 3-1 and their manager, Ronald Koeman, afterwards described Northern Ireland’s counterattacking approach as “terrible to watch”. Pleasing Koeman is not O’Neill’s job but his team were more adventurous a few days later, all the same, when they raced into a 3-0 lead in the friendly in the Czech Republic before clinging on for a 3-2 win. With victory required on Saturday, Northern Ireland will need to find a perfect balance between solidity and derring-do. PD

Ghanaian football authorities have been running a PR campaign under the banner “Bring back the love” as they try to revive belief in the Black Stars after the corruption scandal that led to the dissolution of the country’s FA last year and, on the pitch, a disappointing performance at this year’s Africa Cup of Nations. Several newcomers were called into the squad for the start of the latest qualification campaign but one of the most exciting, 20-year-old Valladollid centre-back Mohammed Salisu, has had to withdraw because of injury. At least there is still the possibility of Torric Jebrin, who has been outstanding for TP Mazembe this season, featuring in midfield. This is the first competitive match for South Africa’s manager, Molefi Ntseki, since his appointment in August and a win away to their main rivals in the group would amount to the perfect start for him at least. PD

6) Can Parrott climb Irish pecking order in time for Denmark?

What’s worse than a meaningless friendly? A counterproductive friendly! So hats off to the Football Association of Ireland for arranging to play New Zealand on Thursday four days before their critical Euro 2020 showdown with Denmark. Unless Mick McCarthy loses his sense of reason, he will not play any players on Thursday that he plans to start on Monday. Granted, there is the possibility that 17-year-old Troy Parrott will do so well on his senior international debut that McCarthy will throw him into the starting line-up for Monday, especially with Aaron Connolly missing that match through injury. But given that McCarthy could not bring himself to start Connolly against Georgia a week after he had scored twice for Brighton against Tottenham, the best Parrott can realistically hope for is a prominent place on the bench for the Denmark game. That would still leave scope for the prodigy to make a heroic late contribution for Ireland, who must beat Denmark to qualify automatically for the finals. PD

Teemu Pukki has not scored for Norwich in the Premier League since 14 September but the striker has been a consistent menace with Finland. His two goals in the 3-0 win against their nearest challengers, Armenia, in their last international game took the nation to within touching distance of their first ever major finals. With the Group J whipping boys Liechtenstein up next in Helsinki, a win would guarantee them a place at next summer’s tournament. Expect Pukki, who has scored seven in eight qualifiers, to be the man who sparks the party. Perhaps then he could bring some of his international sheen back to Norwich with him. GB

8) Six and Guinea look to Keïta for hope

Claudio Ranieri knows that “underwhelming” appointments can sometimes work out very well but fans of Guinea, having been teased by reports linking the country with the Italian, remain less than enthused by the hiring of Didier Six. His first match with Guinea last month was an embarrassment, a 1-0 friendly defeat to Comoros followed by a slightly better 3-2 defeat to Chile. Guinea will have to improve much more for Six’s daunting first competitive game, away to Mali on Thursday. As if that assignment were not difficult enough, injury has deprived Guinea of key players, including the Roma midfielder Amadou Diawara, captain Ibrahima Traoré, and defender Florentin Pogba. All of which means even more hope than usual will be invested in Naby Keïta, who missed his side’s two matches last month. PD

9) Hagi leads out Romania to vanquish ghosts of 1994

For those seeking a denouement awash with permutations, look no further than Euro 2020 Group F. Spain are home and hosed, Sweden are second while Romania sit a point behind them and Norway four in arrears. The Norwegians are still in the mix given that their remaining matches are at home to the Faroe Islands and away to Malta, but the far greater likelihood is that Romania v Sweden in Bucharest will ultimately decide qualification. It is do or die for the hosts, who essentially need to win and then hope Spain are in charitable mood in Madrid three days later – given Sweden face the Faroes that day. This will only be the fourth time these two nations have met since the 1994 World Cup, when Sweden won a magnificently dramatic quarter-final on penalties. Neither present-day side can hold a candle to those of 25 years ago, but both are improving and Romania can look to a particularly talented group of young players spearheaded by Ianis Hagi. Realistically there is hardly anything to choose between any of the three contenders – nerves will be jangling throughout the weekend. NA

Until last week it seemed that Iraq might host Iran on their own soil for the first time since 2001. They were to face their bitter rivals in Basra, just weeks after hosting Hong Kong there in the first competitive international to be hosted in the country for eight years, but the political situation there has deteriorated this autumn, so Fifa decreed that the match must be held elsewhere. The stakes on Thursday in Amman could not be much higher. Iraq, coached by Srecko Katanec, sit atop Group C in the third round of Asia’s labyrinthine World Cup qualifying tournament and three points would put them four points clear of Marc Wilmots’s Iran at the halfway stage. Iraq still have a way to go before they can dream of a first finals appearance since 1986, especially given the hurdles that are continually placed in their path, but a win in the Jordanian capital would be a significant statement. NA