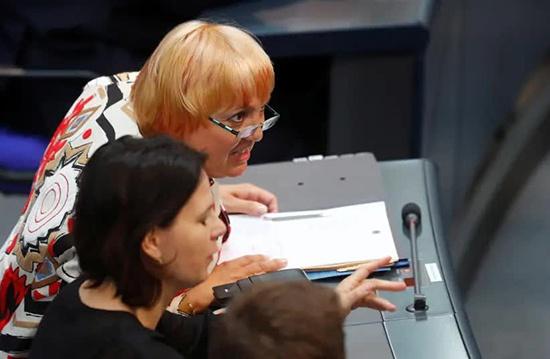 Analysis: The parties have been pushing for a boycott of Israeli products for nearly a decade

The EU’s top court has been engulfed since Tuesday in an antisemitic legal scandal because of its singling out of Jewish, Israeli products from the disputed territories for a punitive labeling system. Critics say the legal ruling is discriminatory.

What has been omitted from the rage over the alleged European Union discriminatory ruling is that Germany’s main neo-Nazi party and the German Green Party advocated a labeling of Israeli products from the disputed West Bank, Golan Heights and east Jerusalem territories as early as 2012 for the Nazi party NPD and for the Greens in 2013.

“The #EUGH [the European Court’s German acronym] has judged that products from Israeli settlements in the West Bank + the occupied territories in the #EU must be clearly declared. No more! But not less. For me, it is the right of #consumers to make an informed choice. #Righttoknow,” tweeted Green Party MP Renate Künast on Tuesday.

Künast once invoked a contemporary antisemitic conspiracy theory to describe a German organization as a “Mossad organization” that seeks to advance Israel’s security and stop Iran’s nuclear weapons program.

“They [the Germans] have a lot of experience of labeling and they should know better, ” Dr. Efraim Zuroff, the Simon Wiesenthal Center’s chief Nazi-hunter, told The Jerusalem Post on Wednesday. He called the EU ruling “sheer hypocrisy” because Israel is singled out, and said it is “reminiscent of dark times in Germany” and the Nazi boycott of Jewish products and businesses.

Nathan Gelbart, a prominent Berlin attorney and pro-Israel advocate responded to Künast on Twitter, writing “Hello Renate What about the right to know for products from (really) occupied Western Sahara or from occupied North Cyprus? And what is glued to products of Arab farmers from the West Bank? Right to hypocrisy.”

Künast did not immediately respond to numerous Post press queries on Wednesday evening.

Rewind to 2015 and the EU’s directive to its member states to punish Jewish products with labels stating that the goods were not produced in Israel.

The Greens and the NPD gave Europe’s war on Israel’s economy a shot in the arm. First, the Nazis: In 2009, Jürgen Rieger, a Holocaust denier and then-deputy chairman of the neo-Nazi National Democratic Party of Germany, called on Germans to boycott Israel.

In 2012, the NPD party submitted a legislative initiative in the parliament of the German state of Mecklenburg-Western Pomerania to mark Israeli products. The NPD motion at the time called for “Palestinian and Israeli products” to be labeled and for a “clear designation of origin” to be implemented.

A mere five months later, in 2013, Germany’s influential Green Party introduced an initiative in the federal parliament that largely mirrored the neo-Nazi-sponsored legislation from the previous year.

Henryk M. Broder, a popular German-Jewish journalist, who has testified about contemporary antisemitism in the Bundestag, wrote a column at the time titled “Two Souls, One Thought” in the Swiss weekly Die Weltwoche, noting that the Green and Nazi parliamentary initiatives to demarcate Israeli products are “at their core identical.”

Both initiatives use the historical model of the German Nazi regime boycotts of Jewish businesses starting on April 1, 1933, and invoking the mass slogan: “Germans defend yourselves. Do not buy from Jews!” Broder wrote. The much-documented antisemitism of the Green Party has been reported on over the decades by Broder.

The long-festering issue of antisemitism within the Green Party resurfaced last month in connection with Claudia Roth. The MP Roth, who agreed with sanctioning Israeli products in 2013, was accused by the best-selling German paper Bild of making antisemitism “socially respectable,” because of her meeting with an Iranian Holocaust denier.

Roth has refused to respond to multiple Post media queries about the allegation that her conduct contributes to antisemitism.

A striking feature of the Green Party’s deep obsession with targeting Jewish products with disciplinary action is that the party, like the EU’s top court, ignores the over 100 other territorial disputes in the world. Put simply, the Green Party seeks no economic warfare against Turkish products, for example, for Ankara’s illegal seizure of Northern Cyprus.

Volker Beck, a former German Green Party MP who was in the Bundestag in 2013 – and is widely viewed as pro-Israel – declined to respond to multiple press queries about his party’s energetic support for hurting Israel’s economy. The Post asked him if he sought to stop the anti-Israel Green Party measure at the time, and whether he views his party’s support of labeling Jewish products as antisemitic.

It is also worth noting that the current German ambassador to the US, Emily Haber, defended the alleged antisemitic labeling of Israeli products in the Bundestag in 2013 when she was state secretary. Punishing Israeli goods and its economy has support across mainstream parties in Germany’s Bundestag.

The Israel Hayom columnist Caroline Glick tweeted on Tuesday: “Weren’t the Nazis rooted in the Green Party beginning in the late 19th century? And didn’t Nazis play a key role in establishing the postwar Greens? Didn’t the Greens push to label Jewish Israeli goods? (Yes, all the above is true.)”

Glick , a former columnist for the Post, hit a button about the Nazi roots of the Green Party.

Take the example of August Haussleiter, who, as co-founder of the Greens in 1979, played an important role in the party’s development. Haussleiter was active in Hitler’s Munich Beer Hall Putsch in 1923 and praised the German Wehrmacht in 1942.

Baldur Springmann, a former member of the SA, the Nazi Party’s original paramilitary organization, also played a critical role in the nascent phase of the German Green Party. He left the party in 1980.