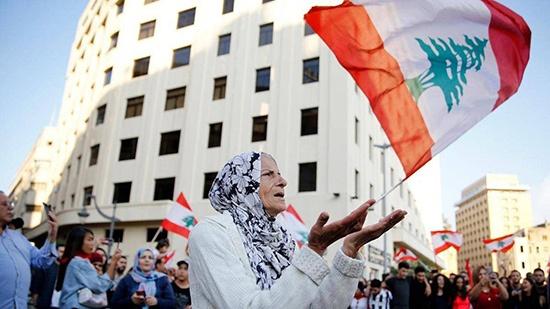 Farnaud, the French Foreign Ministry’s envoy for the Middle East and North Africa, had landed in Beirut Tuesday in Beirut for talks with senior officials centred around breaking the deadlock

BEIRUT: France threw its support behind Lebanon as it grapples with political and economic turmoil, a day after President Michel Aoun’s speech aimed at easing tensions seemingly backfired.

While the message was being delivered to Aoun by a French envoy, hundreds of disgruntled protestors gathered in the vicinity of the Baabda Presidential Palace after security forces set up a security perimeter.

Aoun assured Macron’s envoy, Christophe Farnaud, that discussions over a new government are still underway with “parliamentary consultations set to be announced soon.”

The Cabinet, according to a statement released by his office, would include both independent technocrats and members of Lebanon’s political parties in order for the government “to secure Parliament’s vote of confidence.”

Aoun made similar comments a day earlier, hinting that a “techno-political” government is the most likely avenue moving forward. This sent shockwaves and angered protestors who hit the streets to block roads and main highways linking Beirut to Tripoli and Sidon.

Farnaud delivered a message to Aoun “stressing France’s interest in Lebanon’s situation and its willingness to help Lebanon in the current circumstances,” as Lebanon’s wrestles with nationwide strikes and protests, coupled with a looming financial meltdown. Dollar liquidity remains scarce while banks have remained shuttered for the 5th consecutive day citing security concerns.

Aoun, in an attempt to urge protestors to show good faith, had insisted that decent and honest individuals public office still exist.

“If people aren’t satisfied with any of the decent leaders let them immigrate,” he said, with the ostensible blunder taken out of context while a number of protesters labelled them as insensitive. As tensions ran high, a protester in Khaldeh was gunned down with concerned authorities launching an investigation to determine the circumstances surrounding the killing.

Farnaud, the French Foreign Ministry’s envoy for the Middle East and North Africa, had landed in Beirut Tuesday for talks with senior officials centred around breaking the deadlock that has gripped Lebanon since Prime Minister Saad Hariri submitted his resignation over two weeks ago.

The visit is also seen as an attempt by France, a longtime ally of the small Mediterranean country, to urge rival leaders to accelerate the formation of a new Cabinet.

Aoun acknowledged Lebanon’s dire financial state, “aggravated further as a result of the ongoing demonstrations and employee strikes,” a day after a number of state institutions have gone on strike, including the Syndicate of Bank employees and Touch and Alfa workers.

Offshore oil and gas explorations set to begin in the coming months, however, are bound to offer economic relief to the heavily indebted country, Aoun said.

Farnaud then met with Hariri, with sources telling Annahar that the caretaker premier has yet to shift his position as things currently stand.

Hariri has been adamant in his demand to preside over a Cabinet comprised entirely of independent technocrats which has been rebuked by both the Free Patriotic Movement and its Shiite ally Hezbollah.

Hezbollah clinging to the Cabinet, sources say, is seen as a clear-cut effort to guarantee the impregnability of its military arsenal.

“What the west is asking of us is simply impossible,” he told journalists, in reference to reports of the U.S’ concerted push to further isolate the Iranian-backed militant group.

What started out as a protest against a proposed WhatsApp taxes has ballooned into a massive popular uprising calling for an overhaul of the confessional-based system that has been in place since the end of the civil war in 1990.

Demonstrations have remained largely peaceful across Lebanon with the army succeeding in finding a balance between protestors, on one hand, and those who have taken offence to roads being blocked, on the other.

A scuffle broke out in Jal el Dib at the close of day after an infuriated resident opened fire above protestors who had blocked the inner roads of the area. A fistfight moments earlier also broke out with a number of injuries reported.

The army, who had been absent since the early hours of the morning, quickly made its way to the scene in a bid to restore calm.