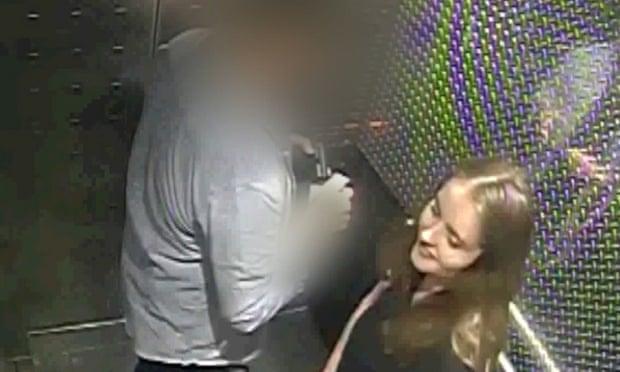 The  Guardian  – Jury watches accused’s second police interview, in which he says Millane’s death was an accident

CCTV footage of Grace Millane inside an Auckland hotel lift with the New Zealand man accused of murdering her. Photograph: Auckland City Police/PA

A jury in Auckland has been shown a second police interview with the man accused of murdering Grace Millane, in which he says the British backpacker had accidentally died while being consensually strangled.

The 27-year-old New Zealand man, whose identity is suppressed, has pleaded not guilty to the 21-year-old’s murder.

In his second formal interview with police, on 8 December, the accused admitted taking Millane back to his hotel room on the night of 1 December after a Tinder date, and said they engaged in rough sex initiated by Millane, evoking scenes she had seen in a film. He said that the next morning, when he realised she had died, he contorted her body into a suitcase.

“It felt wrong,” the man said in the police interview, saying he cried as he carried out the burial and then tried to take an overdose of Panadol and anti-depressant medication to end his life.

Prosecutors allege Millane was murdered by the accused in his hotel room. It is not disputed that Millane died in the CityLife hotel by strangulation, and that the accused buried her body in a suitcase. In an initial police interview, the accused told police he parted ways with Millane at 8pm the night before, and that she had then unmatched him on Tinder.

The man said after engaging in consensual sex with Millane, he passed out in the shower and when he went back to bed he thought Millane had gone home because the lights were off and he could not see her. When he woke the next morning he saw her body lying next to the bed.

“I yelled out at her, I tried to move her to see if she was awake … I was in shock, I didn’t know what to do. I picked her up and tried to wake her up … then I was screaming ‘Grace, Grace’.”

“I took a whole lot of tablets that I had because I realised that she was not alive and I just wanted to end it all, for me.”

The man said he typed in New Zealand’s emergency number, 111, but didn’t make the call. “I was scared how bad it looked … there’s a dead person in my room, I thought it looked terrible. I was in utter shock that that had happened.”

After discovering her body, the accused admitted he then went to purchase a large suitcase and cleaning products in an attempt to remove evidence of Millane’s blood from the hotel carpet. This account has been corroborated by extensive CCTV footage shown to the jury on Wednesday.

“We were having sex so you have to have trust to have sex,” the accused said, saying he had voiced dissent to the “kinky sex” proposed by Millane, but continued when he discovered he liked it.

In the police interview, the accused said he put Millane’s body in the back of a hire car and drove to the Waitakere ranges, a bushland area west of Auckland, and buried her in a shallow grave inside the suitcase.

“I went into the bush and I dug a hole, and I sat there, I sat there and I took 20, 30 paracetamol tablets because I didn’t want to be around if Grace wasn’t there, and I didn’t feel like I deserved to be around, because of what happened,” the accused told police. At the conclusion of the interview the accused agreed to take police to Millane’s grave that night.

The man told police he had decided to reveal what happened in the hotel room because he wanted “closure” for Millane’s family.

The crown closes its case this week, with the defence to call experts next week. It is unknown at this point whether the accused will give evidence.

The trial is set down for four weeks.