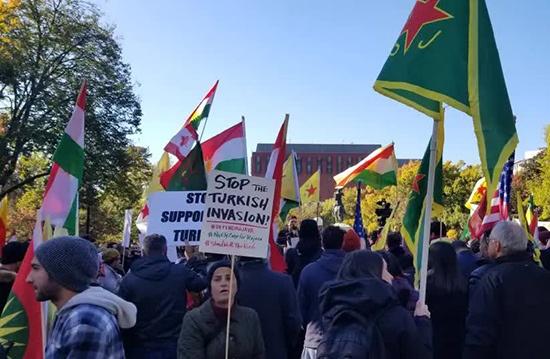 “America, stand with your Kurdish allies,” the crowd chanted.

WASHINGTON – Although it was just above zero degrees Celsius, a few hundred people gathered at Lafayette Park across from the White House on Wednesday to protest the visit by  Turkey’s Recep Tayyip Erdoğan to Washington.

The protesters – many of them Armenian, Kurds, and Greek – carried signs against the Turkish offensive in Northeast Syria, such as, “Stop the Turkish invasion” and “America, stand with your Kurdish allies.” They were chanting “Erdogan terrorist,” among other slogans.

Salar Haji, a 23-year-old man from Harrisonburg, Virginia, moved to the US from Iraqi Kurdistan when he was five. He told The Jerusalem Post that he and his friends carpooled to Washington from his hometown, a place with a large Kurdish community.

“We grabbed as many friends as we could,” he said. “If you believe in the country that you are born and raised in, if you stand with your people, you need to attend such an event.”

“I am Kurdish. Born and raised in Kurdistan,” he added. “Time and time again, history repeats itself. Each generation, you look back, there’s some sort of oppression against the Kurds. Showing our face in events like this is the only way I feel as if I can raise awareness and show support of my people.

“It seems like nobody even mentions this [the situation of the Kurds]. It just goes under the rug,” he continued. “It’s ridiculous for the American president to be backing such things to be going on.”

Soma Aga was born and raised in Harrisonburg, Virginia. She came to the protest with her cousins.

“I think it’s important for me as a Kurd who was born and raised in the United States,” she told the Post. “It helps to feel that connection with my people and to let them know that I’m there with them while they’re struggling.”

She said that she decided to protest “because we have a voice and we have that right. So, it’s important that we exercise our right and let them know that the Kurds [are] a big demographic here in the United States, and that’s unacceptable.”

Azad Kurd arrived at the protest with his father, who currently lives in Canada, and came especially from Toronto to join his son.

“The turnout is great,” he said. “Many people here. We’re here to take a stand and make a change and stop this Turkish invasion on Northeast Syria.

“When you look around the world, there are protests going on in Iraq, in Lebanon, in Hong Kong, huge protests and all these protests show the people in the world that if you all come together and if you bring all your voices together as one and then you can make a difference in the political agendas of international powers,” he said.