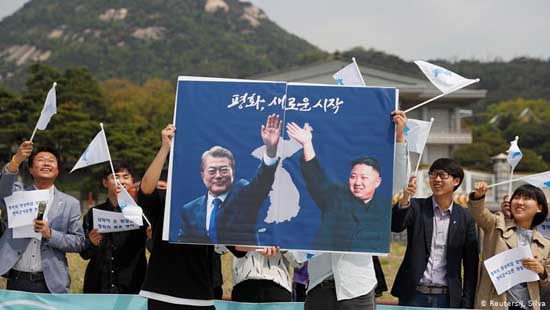 Even though the current situation in Asia differs fundamentally from that of Europe in 1989-90, three basic rules should apply to every process of unifying a state, writes Alexander Görlach.

The reasons may not be immediately evident to Germans, but commemorating 30 years since the fall of the Berlin Wall is also relevant to Asia. During recent visits to the People’s Republic of China and South Korea, I was asked to answer questions on the topic. One question that came up at an event in Shanghai was: What does German reunification mean for the reunification of China? In Seoul, I was asked what are the lessons Germans have learned from the reunification process that could be relevant for Korean reunification.

Remembering the events of November 9, 1989, has shown once again that the events of that time came thick and fast — and that a good portion of luck led to the fall of the Wall that night.

There must be a level playing field

For the Chinese leadership, the question of reunification concerns the island of Taiwan, to which the government of the Republic of China withdrew in 1949 as a consequence of the civil war. In Korea, it is about the unification of the communist north with the liberal-democratic republic of the south.

Today Taiwan is de facto an independent country, with its own passport, its own currency, and its own military. South Korea and North Korea are still officially at war with each other, at least no peace agreement has been signed since the violent conflict ended in 1953.

What can the experiences we have had in Germany contribute here, given the great differences that prevail in China and Korea? On the one hand, I would say that where future partners meet, it is imperative that there is a level playing field. That applies between rich South Korea and impoverished North Korea, and it applies equally to powerful China and small Taiwan.

Gestures of power and a demand for loyalty do not help anyone, nor are they effective. Because this was not always taken into account in Germany, many citizens from the former GDR still have the impression that they were “taken over” or “forcibly reunified.” Socialist Germany was, of course, broke and an unjust state. At the same time, however, it was the home of our compatriots who tried to lead a good life even during the period of socialism, and with whom we wanted to build a new and reunified Germany together.

Furthermore, solidarity is the most important sign that a partnership is being taken seriously. If “what belongs together is to grow together,” as the former German Chancellor and Mayor of West Berlin, Willy Brandt, put it in light of the fall of the Berlin Wall, both sides deserve respect, empathy and support —  in other words: solidarity. Both sides can learn from each other. And both sides must be allowed to retain what makes them unique. In the end, it cannot only be a matter of establishing a new larger economic bloc. It needs to be about defining — together — what the “bonum commune,” or common good, is.

Nothing happens in a vacuum

In the end, such reunifications, of which we speak here fictitiously, do not take place in a vacuum: German unity was tied to the demands of the victorious powers of World War II and those of Germany’s neighbors. A “Greater China” (or whatever such a federation would be called for those who wish to unite in it), or a reunited Korea, would have to approach its neighbors and listen to their hopes and fears about a new, great and powerful partner on their doorstep.

Alexander Görlach is a senior fellow with the Carnegie Council for Ethics in International Affairs and a senior research associate at the Cambridge Institute on Religion & International Studies. He has also held a number of scholarly and advisory positions at Harvard University. He holds doctorate degrees in comparative religion and linguistics and is a guest columnist for several publications, including The New York Times, Swiss daily Neue Zürcher Zeitung and business magazine Wirtschaftswoche.