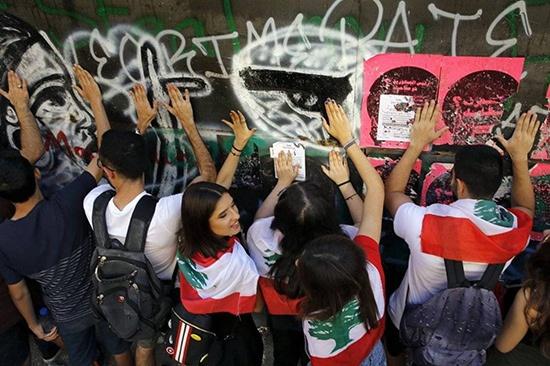 The Lebanese people can no longer accept and never accepted, despite their silence, Machiavellian maneuvers marked with salvage seal.

The Lebanese are not giving up and will not; they’re the State that’s standing in the face of artificial contradictory stakeholder alliances-based authorities forged by an oppressor who’s pursuing an agenda that’s way short of meeting people’s choices. The State, i.e. the people, will no longer tolerate clientelism, nor will they abide by systematic subjugation, or listen to the drumbeats of fragile compromises, let alone threats against protestors vectored by suspicious sources or intimidating accusations from those who are fundamentally ignorant of the very significance of the struggle for truth.

The Lebanese revolution is a pure, pluralistic and decentralized one, now also driven by young students from schools and universities.

It’s a pure movement against leaders rotting in denial, superiority, stubbornness, obstinacy, and complacency in their means of survival, while abusing the Constitution and constantly fabricating new deals under the so-called “Rescue Consultations.” Positioning themselves in a state of elation is nothing but an indication of what’s righteously depicted as a rotten “rule of the powerful” associated with “excess of power,” where they joined hands in a non-governance space while lavishly enjoying the booty of the State, even the leftovers, with a variety of illusions.

This variety of illusions consists of the illusion of restoring curtailed rights, as it appeared that all Lebanese had lost their rights; of being able to hold the sectarian demography with iron fists; of seeing blind obedience in the feeling of obligation for vested rights; of building alliances between minorities and in the Levant when human dignity is looted and degraded; of nipping the revolution in the bud by betting on fatigue, insomnia, anxiety, and threats of chaos and collapse. However, the revolution is destroying those illusions.

In the framework of a pure revolution versus authoritarianism, and under the slogan of correcting the concepts and the policies, people are being called upon to stand by a negotiating leadership. Any such regression would kill the revolution. Before any horizontal structuring, it’s essential to undertake a phased program based on centralized themes illustrated by decentralized dynamics. Negotiation is just a way to dilute the present.

A similar initiative to the one before the parliamentary elections was brought up as a way to pump oxygen, probably in the lungs of the ruler, then the oppressor, based on a wide and far well-known crude mercantilism.

The Lebanese people can no longer accept and never accepted, despite their silence, Machiavellian maneuvers marked with salvage seal.

Their salvation lies in releasing them from an imposed prison and from the real jailer, by commutating their death sentence, and by replacing an unfair and oppressive sentence with topical treatments like forced labor; salvation to be designed by an intelligentsia that’s still adopting a cautious approach to the revolution.

When will it revolt against caution?