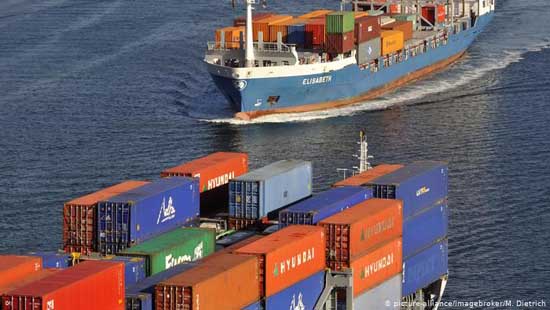 LONDON (Reuters) – World stocks nudged down on Thursday as Chinese economic data slowed in October and Germany only narrowly avoided a recession in the third quarter, adding to worries about the global growth fallout from the U.S.-China trade war.

MSCI’S All-Country World index, which tracks shares in 47 countries, was down 0.14% after start of trading in Europe.

European shares fell after data showing the German economy grew just 0.1% in the third quarter, avoiding edging into a mild contraction thanks to consumer spending, but remaining weak nevertheless.

“Obviously it’s better than expected, but actually I would argue is that it’s a hollow victory because in effect it makes a fiscal response less likely,” said Michael Hewson, chief markets analyst at CMC Markets in London.

“I think if they’d gone into a technical recession, the pressure to loosen the purse strings so to speak would have been much much greater.”

Bond markets also appeared to largely shrug off the growth reading, with most 10-year euro zone bond yields were down around 2 basis point in early trade, with Germany’s 10-year benchmark at -0.32%. [GVD/EUR]

In Asia, stocks fell after soft economic data in China and Japan showed the trade war between Beijing and Washington was hitting growth in some of the world’s biggest economies.

Australia’s S&P/ASX200 wiped earlier gains to close 0.5% higher, while Shanghai blue chips were up 0.15%, supported by expectations that the gloomy figures would add to the case for stimulus.

China’s factory output growth slowed significantly more than expected in October, as weakness in global and domestic demand and the drawn-out Sino-U.S. trade war weighed on broad segments of the world’s second-largest economy.

Fixed asset investment, a key driver of economic growth, rose just 5.2% from January to October, against expected growth of 5.4% and the weakest pace since Reuters record began in 1996.

China and the United States are holding in-depth discussions on a “phase one” trade agreement, and cancelling tariffs is an important condition to reach such a deal, the Chinese commerce ministry said on Thursday.

The weak figures also come as market confidence about a resolution being reached weakens, with a new Reuters poll showing most economists do not expect Washington and Beijing to strike a permanent truce over the coming year.

Trump offered no update on the progress of negotiations in a policy speech on Tuesday. The Wall Street Journal reported on Wednesday that talks had snagged on farm purchases.

Protesters paralyzed parts of Hong Kong for a fourth day, forcing school closures and blocking highways and other transport links in a marked escalation of unrest in the financial hub.

In currency markets, safe havens such as the Japanese yen and Swiss franc gained.

The yen was quoted at 108.70 per dollar, close to a one-week high. The Swiss franc traded at 0.9875 versus the greenback, near the highest in more than a week.

“Increasing signs of unrest in Hong Kong and Latin America coupled with the uncertainty around the trade talks is keeping the risk-off sentiment well and alive in FX markets,” said Lee Hardman, a London-based currency strategist at MUFG.

The dollar was 0.1% lower against a basket of peers.

The Australian dollar skidded to a one-month low after a worryingly weak reading on employment re-ignited speculation about another cut in interest rates.