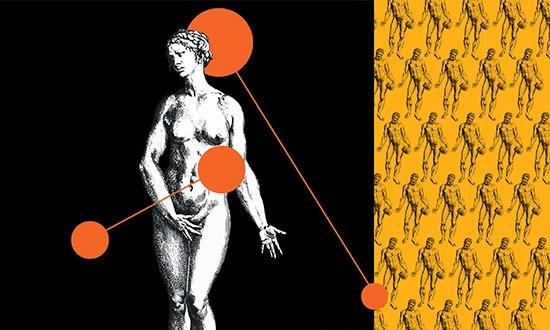 ‘For much of history, women have been excluded from medical and science knowledge production,’ says Dr Kate Young. Composite: Getty

From the earliest days of medicine, women have been considered inferior versions of men. In On the Generation of Animals, the Greek philosopher Aristotle characterised a female as a mutilated male, and this belief has persisted in western medical culture.

“For much of documented history, women have been excluded from medical and science knowledge production, so essentially we’ve ended up with a healthcare system, among other things in society, that has been made by men for men,” Dr Kate Young, a public health researcher at Monash University in Australia, tells me.

Young’s research has uncovered how doctors fill knowledge gaps with hysteria narratives. This is particularly prevalent when women keep returning to the doctor, stubbornly refusing to be saved.

“The historical hysteria discourse was most often endorsed when discussing ‘difficult’ women, referring to those for whom treatment was not helpful or who held a perception of their disease alternative to their clinician,” Young wrote in a research paper published in the journal Feminism & Psychology.

“Rather than acknowledge the limitations of medical knowledge, medicine expected women to take control (with their minds) of their disease (in their body) by accepting their illness, making ‘lifestyle’ changes and conforming to their gendered social roles of wife and mother. Moralising discourses surround those who rebel; they are represented as irrational and irresponsible, the safety net for medicine when it cannot fulfil its claim to control the body.”

In her work, Young has shown how endometriosis patients are often viewed by their treating doctors as “reproductive bodies with hysterical tendencies”. One gynaecologist said to Young: “Do mad people get endo or does endo make you mad? It’s probably a bit of both.” Another said: “There’s a lot of psychology, just as much as there is pathology [in gynaecology].”

Nobody suggests that endometriosis is not a real disease, or is somehow imagined, but there is a general feeling in medicine that women’s reaction to having endometriosis is somehow hysterical, especially when symptoms prevail after treatment has been offered, which is common. And it is not just endometriosis patients treated this way. One male GP said to me: “I’ve never had a fibromyalgia patient who wasn’t batshit crazy.”

Historically, Young says, men have made “the medical science about women and their bodies, and there is an abundance of research evidence about the ways in which that knowledge has been constructed to reinforce the hysteria discourse and women as reproductive bodies discourse. One of my favourite examples is that in some of the first sketches of skeletons, male anatomy artists intentionally made women’s hips look wider and their craniums look much smaller as a way of saying: ‘Here is our evidence that women are reproductive bodies and they need to stay at home and we can’t risk making them infertile by making them too educated, look how tiny their heads are.’ And we see that again and again.”

Not only have doctors, scientists and researchers mostly been men, but most of the cells, animals and humans studied in medical science have also been male: most of the advances we have seen in medicine have come from the study of male biology. Dr Janine Austin Clayton, an associate director for women’s health research at the United States National Institutes of Health (NIH), told the New York Times that the result is: “We literally know less about every aspect of female biology compared to male biology.”

Medicine has always seen women first and foremost as reproductive bodies. Our reproductive organs were the greatest source of difference to men – and because they were different, they were mysterious and suspicious. But the fallout of this difference is that for a long time medicine assumed it was the only difference. Because women had reproductive organs, they should reproduce, and all else about them was deemed uninteresting.

In the early 20th century, the endocrine system, which produces hormones, was discovered. To medical minds, this represented another difference between men and women, overtaking the uterus as the primary perpetrator of all women’s ills. Still, medicine persisted with the belief that all other organs and functions would operate the same in men and women, so there was no need to study women. Conversely, researchers said that the menstrual cycle, and varied release of hormones throughout the cycle in rodents, introduced too many variables into a study, therefore females could not be studied.

Diseases presenting differently in women are often missed or misdiagnosed, and those affecting mainly women remain largely a mystery: understudied, undertreated and frequently misdiagnosed or undiagnosed. This has major knock-on effects for both medical practice and the health of women.

As Young has argued: “Medicine defines the female and male bodies as distinct but not equal; analyses of medical texts throughout history reveals the male body to be constructed as superior and the template against which bodies are judged. Any aspect of the female body that differs from the male or that cannot be given a male comparative (exemplified by the uterus) is viewed as evidence of deviation or “fault”.

“Because women can bear children, medical discourse associated women with the body and men with the mind, a binary division that reinforces and is reinforced by the public-private division … In addition to restricting women’s public contribution, such beliefs provide medicine with an explanatory model of disease and illness in women: to deny one’s ‘biological destiny’ is to incite all manner of diseases, as Plato stated when theorising the wandering womb.”

We see this in many predominantly female conditions: women with endometriosis are told that delayed childbearing causes the illness, or that pregnancy will cure it; women with breast cancer were once fed this line until advances in research (which only occurred because women campaigned for better knowledge and treatments) proved otherwise.

During the 80s, a group of female scientists in the US formed a society to campaign for better health research in women, now called the Society for Women’s Health Research. They teamed up with some US Congress members to draw attention to the discrepancies in medical research and the effect on women’s health.

In 1985, a report by the US Public Health Service Task Force on Women’s Health warned that “the historical lack of research focus on women’s health concerns has compromised the quality of health information available to women as well as the health care they receive”.

The campaign drew attention to some of the absurdities that resulted from this male bias, which Maya Dusenbery has summarised in her 2018 book Doing Harm: The Truth About How Bad Medicine and Lazy Science Leave Women Dismissed, Misdiagnosed and Sick. She notes that, in the early 60s: “Observing that women tended to have lower rates of heart disease until their oestrogen levels dropped after menopause, researchers conducted the first trial to look at whether supplementation with the hormone was an effective preventive treatment. The study enrolled 8,341 men and no women … And a National Institutes of Health-supported pilot study from Rockefeller University that looked at how obesity affected breast and uterine cancer didn’t enrol a single woman.”

And that’s not all.

“The Baltimore Longitudinal Study of Aging, which began in 1958 and purported to explore ‘normal human ageing’, didn’t enrol any women for the first 20 years it ran. The Physicians’ Health Study, which had recently concluded that taking a daily aspirin may reduce the risk of heart disease? Conducted in 22,071 men and zero women. The 1982 Multiple Risk Factor Intervention Trial – known, aptly enough, as MRFIT – which looked at whether dietary change and exercise could help prevent heart disease: just 13,000 men.”

The result of this male bias in research extends beyond clinical practice. Of the 10 prescription drugs taken off the market by the US Food and Drug Administration between 1997 and 2000 due to severe adverse effects, eight caused greater health risks in women. A 2018 study found this was a result of “serious male biases in basic, preclinical, and clinical research”.

The campaign had an effect in the US: in 1993, the FDA and the NIH mandated the inclusion of women in clinical trials. Between the 70s and 90s, these organisations and many other national and international regulators had a policy that ruled out women of so-called childbearing potential from early-stage drug trials.

The reasoning went like this: since women are born with all the eggs they will ever produce, they should be excluded from drug trials in case the drug proves toxic and impedes their ability to reproduce in the future.

The result was that all women were excluded from trials, regardless of their age, gender status, sexual orientation or wish or ability to bear children. Men, on the other hand, constantly reproduce their sperm, meaning they represent a reduced risk. It sounds like a sensible policy, except it treats all women like walking wombs and has introduced a huge bias into the health of the human race.

In their 1994 book Outrageous Practices, Leslie Laurence and Beth Weinhouse wrote: “It defies logic for researchers to acknowledge gender difference by claiming women’s hormones can affect study results – for instance, by affecting drug metabolism – but then to ignore these differences, study only men and extrapolate the results to women.”

Since the 90s, more women have been included in clinical trials but researchers have not always analysed results by sex and/or gender. And though clinical studies have changed substantially, preclinical studies remained focused on male cell lines and male animals.

A 2010 study by Annaliese Beery and Irving Zucker reviewed sex bias in research on mammals in 10 biological fields during 2009 and their historical precedents. It found: “Male bias was evident in eight disciplines and most prominent in neuroscience, with single-sex studies of male animals outnumbering those of females 5.5 to 1. In the past half-century, male bias in non-human studies has increased while declining in human studies. Studies of both sexes frequently fail to analyse results by sex. Under-representation of females in animal models of disease is also commonplace, and our understanding of female biology is compromised by these deficiencies.”

The study also found the justification that researchers gave for excluding female animals – that it introduced too much variability in results – to be “without foundation”.

It took until 2014 for the NIH to begin to acknowledge the problem of male bias in preclinical trials, and until 2016 for it to mandate that any research money it granted must include female animals.

These policies and practices have often been framed as paternalistic, designed to protect women against the harmful effects of medical research. But history belies this notion. The practice of brutal experimentation of medical treatments on women throughout history makes medicine’s unwillingness to include women in scientific studies seem a lot less like magnanimous paternalism. Rather, we are left with the impression that women are not interesting enough for scientific endeavour but good enough for practice.