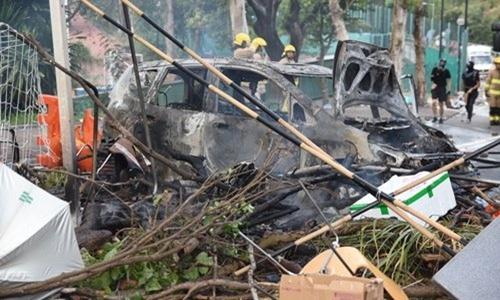 Rioters on Tuesday threw assorted objects from an overpass across a public road inside the Chinese University of Hong Kong (CUHK). To ensure the safety of passing vehicles and pedestrians, police officers tried to take control of the overpass, and then were locked in a face-off with radical protesters. Some rioters took out lethal sports equipment, including bows and javelins, from a large warehouse in the CUHK campus, and used them in the confrontation.

The facts are clear. These radical protesters want to paralyze Hong Kong, and their moves are savage. Throwing items from the overpass is very dangerous, as the objects might hurt pedestrians and drivers and even lead to fatal car accidents if drivers get startled.

The police’s duty is to defend the city’s order in accordance with the law and prevent citizens from being coerced into participating in strikes. Protecting citizens’ safety is the first priority. Therefore, removing the roadblocks in the past two days and controlling the overpass on Tuesday were legitimate.

Would most Hongkongers like to see strikes in the city? The answer is obviously no. If most citizens are willing to answer the radical protesters’ call and to stop working and shut down the shops, there is no need for the rioters to place roadblocks everywhere.

Paralyzing the city is a serious violation of the interests of the majority of Hong Kong people. The visible and invisible costs it brought are bound to be shared by all citizens.

That being the case, all sectors of Hong Kong society should condemn the rioters and voice their support for the police. Many citizens and media outlets are doing this.

But, regrettably, facing such major issues of principle, certain opposition figures and media workers have continued to target law enforcement. They not only accused the police officer who opened fire on Monday of “killing innocents,” but also criticized the police who entered CUHK, although the officers repeatedly explained that they were controlling the situation instead of “occupying CUHK.”

Some people have been fooled by a few radical rioters, and thus they support the rioters every time there is a confrontation. The right and wrong can be easily distinguished in the overpass incident, but some people still act at the rioters’ disposal. Some people also want to benefit politically from it.

When the unrest sparked by the now-withdrawn extradition bill is completely over, it will be obvious that some people’s behavior during the unrest failed to match their fame. For example, a university president should adhere to the basic principles when facing major issues. But some university presidents have not done this at crucial moments.

All those who hope for a good condition for Hong Kong should support and cherish the police’s endeavor. Any act which makes it difficult for the police and weakens police power adds fuel to the fire.