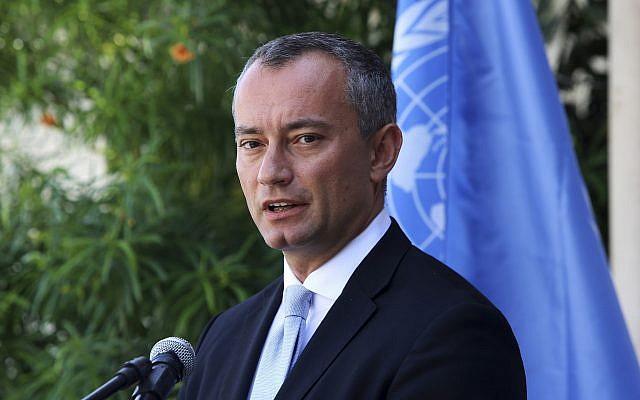 By TOI staff and Agencies

Mladenov said UN and Egyptian negotiators worked to prevent the two-day flareup in violence between Israel and the Palestinian Islamic Jihad terrorist group from escalating into a full blown war.

“Egypt and the UN worked hard to prevent the most dangerous escalation in and around Gaza from leading to war,” he tweeted Thursday.

“The coming hours and days will be critical. ALL must show maximum restraint and do their part to prevent bloodshed. The Middle East does not need more wars.”

Mladenov’s comments came shortly after the ceasefire apparently went into effect at at 5:30 a.m. Thursday following a two-day spike in violence.

Israel has not officially confirmed the ceasefire, but an official said that the Jewish state “achieved the objectives” of its operation in Gaza.

Israel and Palestinian Islamic Jihad have been exchanging fire since Tuesday, following the targeted killing of a top PIJ leader in Gaza.

Islamic Jihad, an Iranian-backed militant group sworn to Israel’s destruction, responded by launching dozens of rockets toward Israel, some reaching as far as Tel Aviv, prompting Israel to carry out scores of airstrikes.

The Israel Defense Forces said more than 450 incoming rockets were fired at the country from the Palestinian enclave in two days.

The Palestinian Health Ministry in Gaza said 32 Palestinians have been killed in the Israeli strikes, including six Palestinians from a single family who were killed in an Israeli airstrike at their house in Deir al-Balah town, central Gaza.

Palestinian health officials have said 13 of those killed were PIJ fighters. Israel said at least 20 were members of the terror organization.

The rocket fire brought parts of Israel to a standstill on Tuesday and Wednesday. Schools closed throughout southern Israel, people stayed home from work and large public gatherings were banned. Air raid sirens wailed during the day and into the evening.

In Gaza, schools and public institutions also were closed Wednesday and there were few cars on the streets, with people mostly staying indoors.

Other than two sirens that sounded in Gaza border-adjacent communities shortly after the ceasefire was declared Thursday morning, tense calm appeared to return to Israel and the Gaza Strip.

The Home Front command lifted security restrictions on much of southern Israel after the truce went into effect, with the exception of the Gaza periphery and Lachish region.

Hamas, the larger and more powerful terrorist group that controls Gaza, has so far avoided entering the fray.

Hamas, which has fought three wars with Israel, has a much more lethal arsenal than Islamic Jihad. But as the governing authority in the territory, it also is more pragmatic and appears to have little desire for more fighting at a time when Gaza’s economy is in tatters.

Shortly after the ceasefire was announced Thursday morning, Foreign Minister Israel Katz said that Israel intends to continue its policy of targeted killings.

“Israel will harm anyone who tries to harm it,” he said.