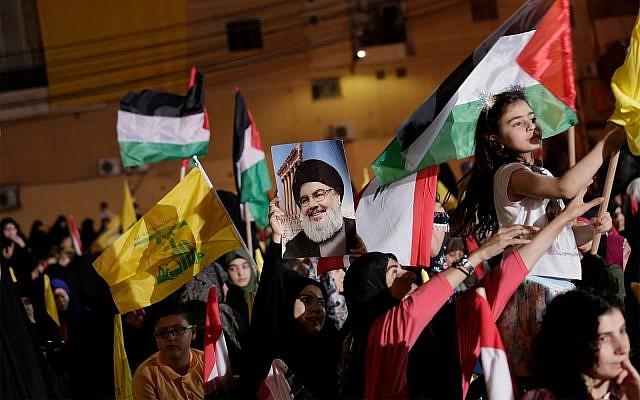 By Raphael Ahren – The Times Of Israel

Hezbollah supporters take part in a rally to mark the anti-Israel al-Quds day in Beirut, Lebanon, May 31, 2019. (AP Photo/Hassan Ammar)

The US is currently not fulfilling Israel’s request that it condition financial aid to Lebanon on efforts to dismantle Hezbollah’s attempt to acquire precision-guided missiles, a senior US State Department official said Wednesday.

“We consider the funding of the LAF [Lebanese Armed Forces] to be a good investment. Of course we listen to our ally Israel and we will take their request under consideration,” US Assistant Secretary for Near Eastern Affairs David Schenker said during a visit to Jerusalem.

So far, Washington has not frozen any aid payments to Beirut, according to Schenker.

Since 2006, the US has provided more than $2 billion in bilateral foreign assistance to Lebanon. Currently, the country receives $105 million per year.

This money “supports the strengthening of the institutions of the Lebanese state following years of Syrian hegemony, bolstering vital public services, preserving the multi-sectarian character of Lebanon, and countering Hizballah’s narrative and influence,” according to the State Department website.

“The United States has a lot of confidence in the Lebanese Armed Forces, and thinks they’re an excellent partner in fighting Sunni jihadist terrorists. And we think that it’s a valuable bilateral security arrangement. And we plan on continuing it,” said Schenker, a former senior member of a Washington think tank who assumed his current position in June.

Israeli officials have publicly called on its partners in the West not to give any aid to Lebanon unless the country tackles Hezbollah’s missile program.

“In discreet talks with various capitals, we made it clear that any aid meant to guarantee the stability of Lebanon needs to be conditioned on Lebanon dealing with Hezbollah’s precision-guided missiles,” a senior official Israeli official said recently. “Anything short of that will be problematic, in our eyes.”

The Foreign Ministry ordered Israeli diplomats “in all relevant countries,” including the US and European states, to emphasize the need to cease providing aid to Lebanon as long as the Iran-backed Hezbollah terror organization does not cease upgrading its military capabilities that could target Israel, the official added.

Prime Minister Benjamin Netanyahu in recent weeks repeatedly warned that Iran was seeking to place missiles around the region to be able to hit Israel.

“Iran wants to use Iran, Iraq, Syria, Lebanon and Yemen as bases to attack Israel with statistical missiles and precision-guided missiles,” he said, using a term that refers to imprecise munitions. “That is a great, great danger.”

Speaking to Israeli reporters in Jerusalem, Schenker also briefly addressed the administration’s policy on Iran. He reiterated US President Donald Trump’s willingness to meet with his Iranian counterpart, Hassan Rouhani, but at the same time noted Washington’s “maximum pressure campaign,” including crushing sanctions, have led the regime to embark on an “escalatory trajectory.”

Despite Iran’s increasing aggression, the US remains open to solving the conflict diplomatically, Schenker said. “This is amazing, unthinkable strategic patience on part of the president. But one has to ask whether this patience is infinite.”

Asked by The Times of Israel how he understood Netanyahu lamenting an “absence of response” in light of increasing Iranian belligerence — a comment many analysts understood as a veiled criticism of Trump’s refusal to forcefully retaliate against the regime — Schenker replied: “This administration has its own approach to this. The president, I think, has done everything he can do to avoid military conflict with Iran. And so he is pursuing that path. As I said earlier, I don’t believe this patience in the face of Iranian aggression will be infinite.”

On October 31, Netanyahu said at the graduation ceremony for the IDF Ground Forces officer’s course that “Iran’s brazenness in the region is increasing and even getting stronger in light of the absence of a response.”

Agencies contributed to this report.