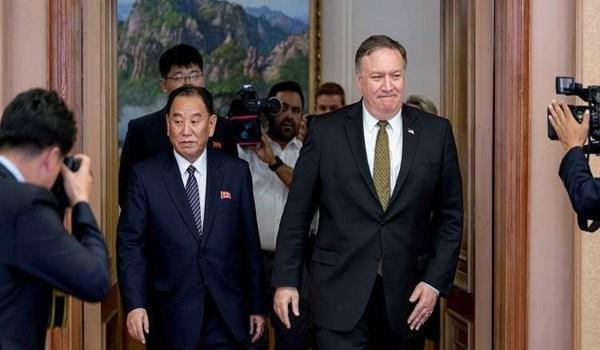 TEHRAN (FNA)- North Korea says there has been no progress in the North Korea-United States relations, and hostilities that could lead to an exchange of fire have continued.

In a statement under the name of Chairman of the Korea-Asia Pacific Peace Committee Kim Yong Chol, Pyongyang has said that it would be mistaken for the United States to ignore a year-end deadline on President Donald Trump’s and North Korean leader Kim Jong Un’s “close personal relations.”

Kim Jong Un has set an end-of-the-year deadline for denuclearization talks with Washington. This is while President Trump continues to flirt with the default use of sanctions and aggressive ambitions to put pressure on Pyongyang to dismantle its nuclear weapons program. The president who likes to golf, also expresses a willingness to hold a new summit with North Korean leader Kim Jong Un.

Trump is still so amazed to wield the sanctions weapon despite the fact that Pyongyang has suspended nuclear tests and missile launches, and wants sanctions relief. The two leaders have managed to build goodwill, but failed to agree on a deal to lift sanctions in exchange for Pyongyang abandoning its nuclear and missile programs.

To his credit, Trump says he is prepared to ease some sanctions, such as “certain humanitarian things”. But it’s not enough to convince Kim that after the collapse of the second summit in Hanoi there’s still some room for a longer “process”, and that the door should remain open to a third summit.

Here, then, is a small suggestion: Trump needs to appreciate that history is passing the sanctions regime by. If he continues this default policy, he will kill the prospects for a denuclearization deal. It is evident that those who have hardened their position against a phased approach sought by Pyongyang, in which gradual steps would be rewarded with relief from sanctions, are not in favor of diplomacy.

As with any application of force, sanctions against Pyongyang entail substantial risks and the geological facts speak otherwise. The escalation will not only drive up the risk of yet another collapse, but will make it harder for the two sides to focus on long-term “process” challenges.

The irony is that US wars and trade restrictions against other nations have backfired, dealing a major blow to the commercial interests of Western companies and investors. The economic sanctions, military pressure, and intemperate threats against Pyongyang will equally prove counterproductive.

North Korean media says Kim, for his part, plans to push forward with efforts to make the economy more self-sufficient “so as to deal a telling blow to the hostile forces who go with bloodshot eyes miscalculating that sanctions can bring (North Korea) to its knees.”

At a time when all American wars, trade conflicts and sanctions now seem to be permanent, why should Kim tolerate a peculiar and lopsided diplomatic arrangement in which he’d be so clearly the loser?

In a strange sense, there should be retaliatory plans in place in the event that Trump follows through on the default use of sanctions. We live in a very different world.

In the international system of economic and geopolitical negotiations, Trump’s golf mates also know that nothing could hurt Trump more than an aggressive stance against Pyongyang that failed to achieve its goals.

The conclusions seem self-evident: Pyongyang has nothing else to offer but “active strategic patience”. The US bullying and excessive demands might push the Korean leader to the path active resistance similar to Iran. Whatever you might think of Kim, Trump needs to stop throwing a wrench into his diplomatic effort.