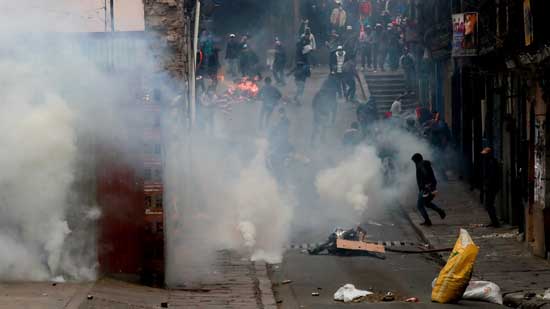 Thousands of supporters of deposed Bolivian President Evo Morales gathered in La Paz to demand the resignation of self-declared “interim” leader Jeanine Anez, where they squared off with riot police in hectic street clashes.

The demonstrators, led by indigenous militia group Ponchos Rojos, were headed toward the presidential palace in downtown La Paz before the clashes broke out, in which protesters returned fire with rocks and other improvised projectiles. The chaotic scenes seemingly went unnoticed in western media.

Following Morales’ forced resignation and flight from Bolivia for political asylum in Mexico earlier this week, opposition Senator Jeanine Anez declared herself “interim president.” While opposition lawmakers argued Anez’s declaration was valid under the Bolivian constitution, the ousted president’s Movement for Socialism Party slammed the move as illegal and boycotted the legislature.

Morales resigned under pressure from top military officials after weeks of opposition protests over the result of October’s presidential election, in which the opposition, as well as the US-based Organization for American States (OAS), alleged “irregularities.” The socialist leader’s ouster has been hailed as a triumph for democracy by Washington and its partners in the OAS, though it did little to quell the unrest in Bolivia.

Speaking from Mexico on Wednesday after a sudden departure from his home country, Morales condemned the OAS for acting “in the service of the North American empire,” and said Anez’s move for the presidency only confirmed that he was pushed out of office in a “coup.” Nonetheless, he called for “national dialogue” to resolve the ongoing disorder.