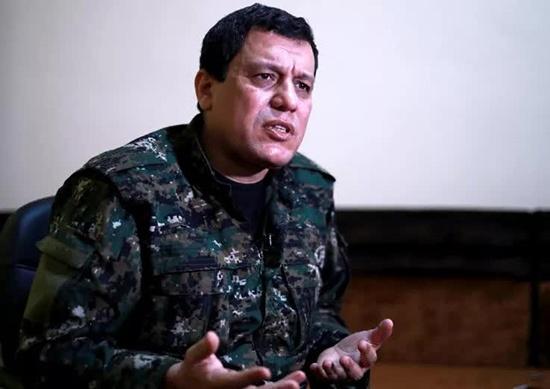 Speaking with Sky News at an undisclosed location in northern Syria, Kobani said the Turkish offensive into SDF-held territory—also known as Rojava—had taken the pressure off ISIS fighters who survived the Western-backed campaign to destroy their so-called caliphate in Syria.

“The danger of the resurgence of ISIS is very big. And it’s a serious danger,” he warned. “I think there are many people who don’t know this but it’s true. The Turkish aggression opened the space and provided hope for ISIS members.”

The SDF had been holding more than 10,000 prisoners when Turkey’s “Operation Peace Spring” began on October 9. SDF forces were already stretched to breaking point, and the incursion meant troops had to be deployed to the front lines rather than guard ISIS prisoners and civilians who had been living in areas under the group’s control.

The U.S. government took custody of a handful of prisoners before they could escape, but officials have also admitted they do not know exactly how many detainees have been freed, nor where they are.

Turkey’s offensive was facilitated by President Donald Trump, who abruptly ordered the withdrawal of U.S. troops stationed alongside SDF forces. This left the way open for Turkish President Recep Tayyip Erdogan to begin the assault.

Trump’s announcement asserted that Turkey would now be responsible for ISIS prisoners held by the Kurds, but provided no information as to how they would take custody of the fighters or what would happen to them afterward.

Many of those held are foreign fighters. Many Europeans have been left in limbo by the home nations that have refused to take the prisoners back.

This has frustrated both Trump and Erdogan, the latter regularly warning he would send militants home whether Europe was ready to accept them or not.

Trump has shown little concern. Asked whether he was worried about ISIS fighters being able to flee amid the chaos of a Turkish operation, the president replied: “They’re going to be escaping to Europe. That’s where they want to go, they want to go back to their homes.”

Kobani told Sky News that a “spectacular” attack like the 2015 Paris shootings was “possible.” He explained, “It’s one of the expected things that may happen in the future.”

Kobani claimed that Turkey is actively driving the ISIS resurgence. Erdogan’s government has long supported jihadist groups in Syria, and extremist fighters are among Turkish-backed forces invading Rojava. Some of these militants have been accused of war crimes during the operation.

Turkey has also been accused of harboring ISIS fighters, allowing them to be treated in Turkish hospitals and facilitating their movements into Syria.

“Yes. It’s a big allegation and there’s evidence of it. Many people know it,” Kobani told Sky News. He suggested Turkey has also supported fighters from Al-Qaeda and its Syrian affiliate the Al-Nusra Front.

Kobani noted that some U.S. soldiers remain in northern Syria, despite Trump’s order to withdraw troops. The general said his forces are still working with U.S. and British forces as the Kurdish-led coalition continues its anti-ISIS operations and defends against Turkish attack.

He also said he had spoken with Trump and Senator Lindsey Graham—an ally of the president with some foreign policy influence over him—about the situation. “They promised they will address this issue. We don’t know how…but they promised,” he said.

Kobani is wanted by Turkey. He is a commander of the Kurdish People’s Protection Units (YPG), which forms the backbone of the SDF.

Ankara considers the YPG an extension of the Kurdistan Workers’ Party, which has been fighting an intermittent guerrilla war in Turkey since 1980 and is a proscribed terrorist organization in both the U.S. and European Union.

Kobani told Sky News that erratic U.S. policies have put him and the SDF in a difficult position. “America does not have a clear aim,” he said. “We want something clear for us—what we want is for America to say we will remain here until we reach a solution in Syria.”

“Otherwise, we have fear about the battle against ISIS and the safety of our population,” Kobani added.