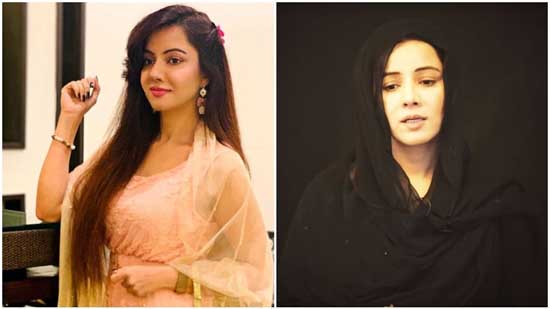 Sobbing Pakistani singer Rabi Pirzada has slammed people for disseminating intimate pictures of her in her first public address since the nude photo scandal broke earlier this month.

Muslims who shared the leaked nudes “will be punished in this life and hereafter because Allah’s grasp is severe,” Pirzada said in an emotional video.

“They are guilty in Allah’s court and they will be punished. I pray that such kind of people should be punished.”

The pop singer and TV host delivered her message clad in black clothes and a headscarf – in stark contrast to her usual profile on social media, where she is often seen sporting colorful dresses, flashy jewelry and elaborate hairstyles. Pirzada cited many verses from Islamic religious texts in the video, breaking down in tears several times.

The singer said she herself has “disobeyed” God, and reiterated a promise to dedicate her life and singing career to religion from now on.

Even before the nude photos and videos of Pirzada were leaked, she enjoyed a somewhat notorious reputation due to a number of provocative stunts, such as posing in a suicide vest and making viral videos, in which she sent threats to Indian Prime Minister Narendra Modi.

Some female celebrities of South Asian origin, however, stood in solidarity with Pirzada on social media and posted their own racy photos in support of her.