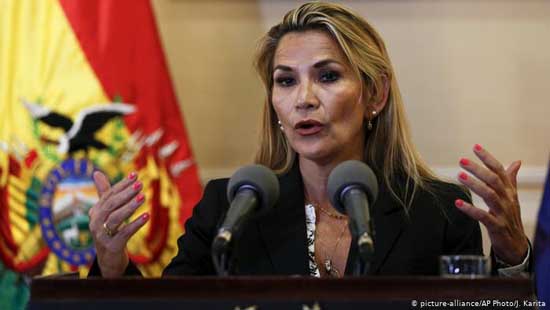 Jeanine Anez has said that recently ousted president Evo Morales has no right to run in any upcoming national vote. The Latin American nation, however, remains divided over who should run the country.

Jeanine Anez, a Senate deputy leader who claimed the presidency earlier this week, told a news conference: “Evo Morales does not qualify to run for a fourth term.”

She also criticized Mexico for allowing the former president to rally support in exile.

“We have to let the Mexican government know that cannot be happening,” said Anez, who says she wants to bring calm to Bolivia but has been accused of unfairly seizing power by Morales supporters.

Anez is striving to restore stability to a deeply-divided nation that has been rocked by protests since an election in October, which was won by Morales but tainted by allegations of fraud.

Despite the accusations of electoral irregularities, and Anez’s call for calm, Morales still holds strong backing in his homeland.

Demonstrators flooded the streets Thursday, brandishing the national flag and waving the multicolor “Wiphala” flag that represents indigenous peoples, in support of Morales.

Meanwhile, protesters in the central city of Sacaba, were shouting: “Evo: Friend, the people are with you!”

Morales said he will ask the United Nations and possibly Pope Francis to intervene in a bid to resolve the dispute.

He told the Associated Press he still considers himself president because the Andean nation’s Legislative Assembly has yet to recognize his resignation.

“If they haven’t accepted or rejected it, I can say I am still president,” he said.