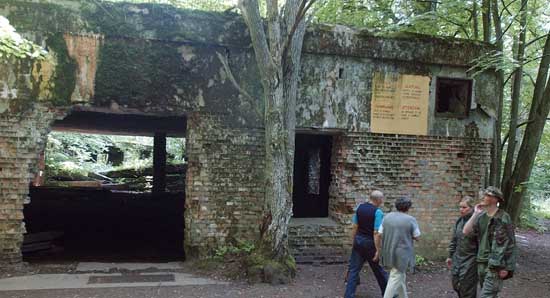 A garden that once provided Adolf Hitler with fresh vegetables has been discovered at his infamous Wolf’s Lair headquarters in Poland, where the Nazi leader spent most of the final years of the war.

The top-secret, heavily guarded bunker complex on the grounds of Mazurolandia was used by the Nazis until January 1945, when it was abandoned and partly destroyed ahead of advancing Soviet forces. The excavations took place during the summer when the garden was found.

“We discovered Hitler’s Garden in the 4th Zone of the Wolf’s Lair,” said Mazurolandia park, in a translated statement, adding that experts from the Mazurian Military Museum were brought in to investigate the site.

The First News reports that the garden was found 2,953 feet from Hitler’s bunker. The excavation uncovered the foundations of the gardener’s house, two greenhouses and an underground boiler room that provided water and warm air to grow fresh produce all year round. Wartime ceramics, porcelain and glassware confirmed the time the garden was operational.

Hitler was a vegetarian, teetotaler and non-smoker, so his bunker had vegetables delivered on a regular basis. Later in life, he was paranoid about being poisoned, so the Nazi leader also ensured that a number of food tasters worked at the Wolf’s Lair to sample his meals.

“The food was delicious, only the best vegetables, asparagus, bell peppers, everything you can imagine. And always with a side of rice or pasta,” Margot Woelk, one of the food tasters, told the Associated Press in 2013.

Woelk, then in her mid-twenties, spent almost 22 years as one of 15 young women who sampled Hitler’s food at the Wolf’s Lair.

The Wolf’s Lair was also the scene of an unsuccessful attempt to assassinate the evil German leader on July 20, 1944, when trusted colonel Claus von Stauffenberg detonated a bomb in a conference room at the headquarters. Hitler survived, but nearly 5,000 people were executed following the assassination attempt, including von Stauffenberg.

A number of Nazi sites from World War II have been unearthed in recent years. Earlier this year, local government officials announced the discovery of hundreds of items at Nazi massacre sites in northwestern Germany. Experts are also looking to unlock the sinister secrets of hidden Nazi bases dotted across Europe, including the vast base of Dag Bromberg, which, like the Wolf’s Lair, is hidden in a Polish forest, and the V-2 rocket base Kraftwerk Nord West in France.