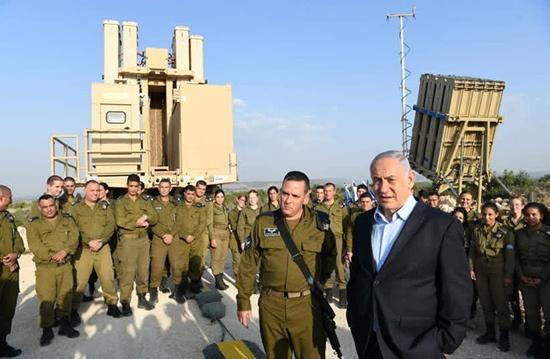 Senior PIJ official claims this was just one round, not the end • PM: ‘We can reach everyone, even in their bed’

www.jpost.com-   By TOVAH LAZAROFF
The IDF remained on high alert on Thursday as sporadic rocket fire against southern Israel shook but did not destroy a fragile ceasefire understanding between Israel and the Palestinian Islamic Jihad (PIJ) that went into effect on Thursday morning.

In addition to the rockets, Friday’s weekly Palestinian protests along the Gaza border fence also have the potential to reignite the violence. Media reports claimed that Hamas planned to cancel the event for this week.

Six rockets were fired toward southern Israel throughout the day on Thursday. Three rockets were intercepted by the Iron Dome missile defense system.

“At this point, it’s not over yet,” said Defense Minister Naftali Bennett. “Only the acts in the field will determine the end.”

Earlier in the day, IDF Spokesman Brig.-Gen. Hidai Zilberman confirmed that after 50 hours  of heavy cross-border fighting in which the country appeared to be on the verge of war, the military activity against Palestinian Islamic Jihad (PIJ) – dubbed “Operation Black Belt” – had achieved all of its objectives quickly and fully.

The IDF and political officials met in the evening to determine how to proceed with the ceasefire understand in light of the occasional rocket fire.

The IDF’s Home Front Command had lifted restrictions on southern Israel on Thursday morning and allowed students to return to their studies, but by evening, border communities had canceled those classes for Friday.

“The IDF remains on high alert for many scenarios,” Zilberman said, adding that it needs to remain focused on the northern front. “We are at high readiness and preparedness on all fronts, not only in Gaza,” he said. “We are facing a significant challenge against Iranian activity in a variety of arenas, and not only in Syria.”

Samir Zaqout, a senior PIJ official, told the Gaza-based Al-Watan Voice news website that the ceasefire agreement was not “permanent.” The agreement, he said, is aimed at “protecting the blood of our people.”

“This was just another one of the rounds, and not the end,” he said. “It does not mean that Palestinian Islamic Jihad will stop its jihad. During the period of calm, we will continue our preparations for inflicting pain on the enemy.”

According to Zilberman, the threats posed by Iran were taken into consideration for the operation, and the military took advantage of the window of opportunity in Gaza when it carried out the assassination of PIJ leader Bahaa Abu Al-Ata on Tuesday morning. The terrorist group retaliated by launching more than 400 rockets against Israel within 48 hours, which caused casualties but no Israeli fatalities.

“We discovered al-Ata’s location and we were able to reduce civilian casualties caused by the strike attack,” Zilberman said. “At the same time, the threat of attacks by Iran’s Quds forces in the North had declined during the past 10 days. We saw a window of opportunity to thwart more attacks.”

Bennett was present throughout the assessments and discussions with senior IDF officials and the security establishment regarding the operation, including the last few hours ahead of the ceasefire.

He spoke of Israel’s clear and public resumption of a policy of targeted assassinations as a deterrence.

“The new rules of the game are clear: the IDF will operate with complete freedom of action, with no restrictions,” Bennett said. “A terrorist who tries to hurt the citizens of Israel will no longer be able to sleep peacefully, neither in his home nor in his bed, nor anywhere in hiding.”

Later in the day, Prime Minister Benjamin Netanyahu toured a missile intercept control center and an Iron Dome battery in the South, where he thanked IDF soldiers, the Shin Bet (Israeli Security Agency), the cabinet and all who were involved in Operation Black Belt.

Netanyahu touted the success of the overall operation, whose goals, he said, had been fully achieved.

On Tuesday, Wednesday and Thursday morning, the IDF had targeted PIJ infrastructure and its top terrorists in Gaza. A total of 36 Palestinians were killed, including 25 terrorists from PIJ or rogue factions in the Strip. Shortly before the truce was announced, eight members of the same family in Gaza, including five children, were killed in a pre-dawn Israeli airstrike.

The operation was characterized by “surgical operations and surprise,” said Zilberman, as well as by cooperation between the air force, Military Intelligence and the Shin Bet.

“With a combination of military personnel from a variety of units who specialize in SIGINT and HUMINT, we were able to attack cells and close the circle against targets very quickly,” he said. “That’s what killed 25 terrorists, who were in the midst of carrying out hostile activity.”

According to Zilberman, the goal of the operation was to focus all strikes against PIJ while leaving Hamas alone, differentiating between the two groups to enable the continued stabilization of Gaza.

“The purpose of the operation was to improve the security situation in the South by weakening the PIJ and to continue promoting the stabilization process,” Zilberman said. “In this operation, we struck a heavy blow to PIJ’s operational capabilities,” hitting the group’s infrastructure, including underground facilities, rocket manufacturing and naval assets.

However, he added, “we used only a little of the IDF capabilities – PIJ is not Hamas, nor Hezbollah nor Iran.”

Zilberman accused al-Ata of being in direct contact with PIJ in Syria in order to carry out attacks against Israeli troops and civilians.

He was assassinated in order to “get an obstacle for stability and different diplomatic arrangements out of the way.”

Foreign Minister Israel Katz and a number of other politicians spoke to the media about the success of the policy of targeted assassinations, with Katz noting in particular Israel’s achievement in keeping Hamas out of the fighting. Hamas, which rules Gaza, is typically one of the driving forces for the violence against Israel, and Operation Black Belt marks the first time it has stood on the sidelines.

The PIJ differs from Hamas, even though both are dedicated to the destruction of Israel, Katz said. While Hamas cooperates with Iran, PIJ is a clear “Iranian proxy.”

Deputy Defense Minister Avi Dichter told Army Radio that it had been clear from the start that the PIJ would respond to the assassination. The open question was whether Hamas would join in.

“Why didn’t Hamas enter this latest round?” he asked. “Because it knew what the Israeli response would be.” During the last round of Gaza violence in May, which did involve Hamas, Israel targeted and killed Hamas financier Hamed Ahmed Abed Khudari.

Former defense minister and Yisrael Beytenu Party head Avigdor Liberman told Army Radio that it was a mistake to read too much into Hamas’s restraint, warning that in three years Hamas would be akin to Hezbollah in Lebanon.

UN Special Coordinator for the Middle East Peace Process Nickolay Mladenov, who together with the Egyptians had brokered the cease fire understanding, warned that the risk of war remained high.

“#Egypt and the #UN worked hard to prevent the most dangerous escalation in and around #Gaza from leading to #war,” Mladenov tweeted. “The coming hours and days will be critical. ALL must show maximum restraint and do their part to prevent bloodshed. The #MiddleEast does not need more wars.”

A cessation of hostilities between Israel and a terror group is most often described as a restoration of calm. The details of these understandings are often leaked through the media and are rarely issued or confirmed by the Israeli government.

The Palestinian Sawa news agency reported that under the terms of the arrangement reached in Cairo, Palestinians would “maintain peace” at the weekly Gaza border protests. Israel in turn would put an “end to assassinations” and would not respond violently to the border protesters.

Israeli ministers denied that these were the terms, stating that their understanding of affairs was that “calm would be met with calm.”

As a first step after the cease fire understanding, Israel reopened the commercial crossing into Gaza at Kerem Shalom and the pedestrian crossing at Erez. It also removed restrictions on the fishing zone off of the Gazan coast, allowing Palestinian fisherman to work up to 15 nautical miles from the shore.

PIJ leaders defended their decision to accept an Egyptian-brokered ceasefire with Israel, saying on Thursday that the move came after the Israelis “begged” for a cessation of the violence. They also claimed that PIJ managed to “impose” its conditions on Israel through the ceasefire agreement.

Senior PIJ official Mohammed al-Hindi said that Netanyahu “found himself in a big crisis because of the rockets fired into Israel, and that’s why he was quick to ask for a ceasefire.”

Hindi said in a radio interview that his group’s rockets “paralyzed the Zionist entity, forcing Netanyahu to beg for a ceasefire.”

He further claimed that Netanyahu “decided to wage war on the Gaza Strip to cover up for his failure to establish an extremist right-wing government.”

The PIJ official said that his group managed to “preserve its deterrence capability” in the aftermath of the fighting with Israel.

Referring to the ceasefire understanding, Hindi said that the terms of the truce are “reasonable and realistic.” He said that the ceasefire understandings reached earlier this year between Israel and the Gaza-based Palestinian groups required Israel to stop shooting at peaceful demonstrators participating in the weekly protest near the border with Israel.

“This is an open battle” with Israel,” Hindi added. “The Palestinian Islamic Jihad scored a big achievement and is capable of teaching the enemy one lesson after the other.”

The spokesman pointed out that the ceasefire accord calls for halting Israeli targeted killings, “protecting the Great March of Return [weekly demonstrations near the Gaza-Israel border] and taking practical measures to lift the blockade imposed on the Gaza Strip.”

The PIJ, Breim added, has “made a statement, confronted the [Israeli] aggression, undermined the prestige of Netanyahu and defended our Palestinian people.”

Other PIJ officials warned that their group would not hesitate to resume its terror attacks if Israel does not abide by the terms of the ceasefire.