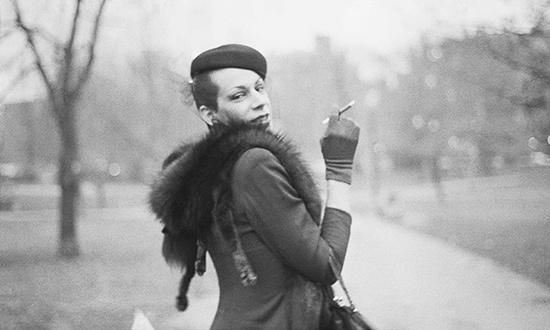 Marian Goodman Gallery, London
The artist’s first UK show in 20 years is a knotty elegy to youth and the people we leave behind

Who knows where the time went … Ivy on the Way to Newbury St (1973) by Nan Goldin. Photograph: Nan Goldin

Nan Goldin photographs her life, her friendships and loves, her losses and addictions, good times and bad times. Little, if anything, is off-limits. The first large show of Goldin’s work in the UK in almost two decades might be accused of raking over old ground. But Goldin often returns to her past, reincorporating older images in new work, adding previously unseen photographs, or presenting mechanical carousel slide-shows in digitised and soundtracked narrative sequences.

And so it is here, in an exhibition that takes us from black and white to colour, from snatches of old Super 8 footage to answering-machine conversations, from a fire-eating queen in Manila to a drag bar in Boston. Here is someone crashed in a hotel corridor, stranded on the carpet between closed doors and the remains of room-service dinners. Here are blown-up airplane window sunsets and what, the title tells us ominously, is “the sky on the twilight of Philippine’s suicide, Winterthur, Switzerland”. This large-scale print gives us a bilious dirty orange sky, a silhouetted chimney, a sodium-yellow streetlight glowing in the dusk. The world heaves in this image, its emotional weather, the uncanny light.

Threaded through the exhibition are warm photographs of Goldin’s friends and lovers, the drag queens, cross-dressers, transexuals and third sexers. These days such imagery – and the celebration of these lives, much less the lives themselves – is much less contentious than in the 1970s, when many of the photographs were taken. Freedom of sexual expression and openness about gender is one of the only things I envy in the young. Life was more problematic in the early 1970s, when Goldin was in her 20s.

How beautiful and proud and out there they are: having fun, partying, just being. Many have died, often too young. Many of these images of her friends appear in her 1994 slideshow The Other Side, recently expanded, and in the photographs on the gallery walls. Songs by Peggy Lee, Marianne Faithfull and others accompany Goldin’s lilting slide show. Charles Aznavour sings What Makes a Man a Man. Seeing many of these images again is like encountering old friends, the dead as well as the living.

The composer and performer Mica Levi provides the soundtrack for Memory Lost, one of two new digital slideshows here. Memory Lost charts Goldin’s life though her addictions. Levi’s trembling, elegiac music is shot through with phone conversations and snippets of gut-wrenching monologue. Innocent Super 8 footage of good times collapses into shots of barking dogs, roads and buildings and blurred passages where memory, it seems, is slurred by dope and booze. There’s a discussion as to whether dope is worse for the memory than coke, and if booze is worst of all. A closeup of a couple from Hieronymus Bosch’s Garden of Earthly Delights flashes up, and here is a copy of Goldin’s book, The Ballad of Sexual Dependency, based on the 1986 slide-show that made her name. White lines are chopped out on the cover. Churches and catacombs and details of artworks – some Goldin’s own paintings – flash by. A gaudy inflatable paddling pool sits in a field. A man talks about never being held as a child and someone says she couldn’t leave the house, and it must be autumn now, the beautiful turning leaves mocking her.

Who knows where the time went. There are pills strewn everywhere. Time wallows and speeds up, Levi’s music going with it, and suddenly – everything hits you suddenly, as if time’s collapsing – we come to a sign on a pharmacy door. “WE DO NOT STOCK OXYCONTIN”, it reads. And here’s a corner of a mattress, a hole burned right through it. Goldin’s addiction to the prescription opioid, and her campaign against the Sackler family much of whose arts philanthropy has relied on the profits made from mass pharmaceutical addiction is more than a subplot here.

Goldin’s images stand in for memories, with its lapses, repetitions, the mess we leave behind, all mingled with the people who are gone, and the things we cling to. Memory Lost reworks it all, running past and present into something like a narrative. As unwieldy and sprawling as it is, the work attempts to grapple with it. All her work, I think, is a kind of memoir, an insistent retelling of the same things over and again in different ways – because that is all that can be done.

Another new work, Sirens, is screened right after Memory Lost in the same space. Using found footage, it constantly brings me up short: from a naked body silhouetted on the other side of a glazed door, a metal wire dragged over cobbles, skin picked away from a lesion with a safety pin, people dancing in red light, a field of bodies coming to life. Everything roars. Seeing either of these works once is not enough. Seeing them a second time feels like too much. But like Goldin herself, I cannot turn away.