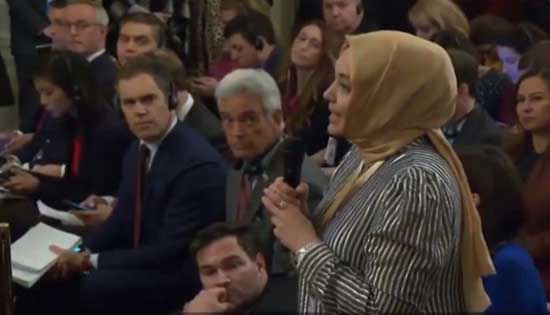 US President Donald Trump could not help but question the credentials of a pro-government Turkish journalist who asked him a question at a press conference with Turkish President Recep Tayyip Erdoğan at the White House on Wednesday.

During the press conference Erdoğan pointed to Hilal Kaplan as the next journalist to ask a question. Kaplan asked Trump about a Syrian Kurdish leader with the code name Mazlum Kobane who she said had masterminded at least 17 terrorist attacks in Turkey, claiming the lives of 116 military members and civilians. Kaplan asked Trump whether he still wants to invite Kobane to the White House.

When Trump finished answering Kaplan’s question, he returned to the journalist again and said: “You could ask the president [Erdoğan] a question now. Same reporter… You sure you’re a reporter, you don’t work for Turkey? With that question?”

Kaplan is known to be a staunch supporter of Erdoğan and his ruling Justice and Development Party (AKP). She writes for the pro-government Sabah daily and frequently accompanies Erdoğan on his foreign visits.

Kaplan and her husband also run a troll group called the Pelikan Group, which forced former Prime Minister Ahmet Davutoğlu to resign in May 2016 with a list of unattributed files they published in April 2016. The files detailed issues of conflict between Davutoğlu and President Erdoğan and harshly criticized Davutoğlu for refusing to push Erdoğan’s political agenda.