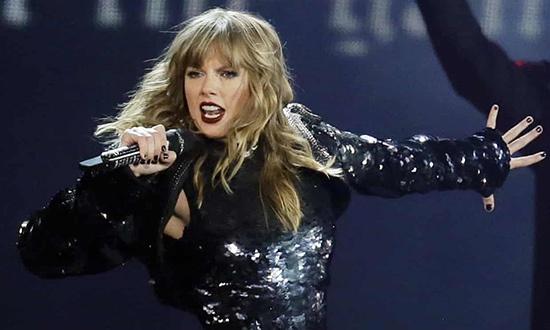 Taylor Swift says her performance at the American music awards is in doubt due to her feud with ‘tyrannical’ music managers Scooter Braun and Scott Borchetta. Photograph: Rick Scuteri/Invision/AP

Taylor Swift’s performance at the American music awards is in doubt, as is the future of a new Netflix documentary about her, the singer has claimed, thanks to an ongoing feud with “tyrannical” music managers Scooter Braun and Scott Borchetta.

“Don’t know what else to do,” Swift wrote in a tweet, which contained screenshots of a long statement in which she alleged that Borchetta and Braun, who own the rights to her early albums, were preventing her from performing her own work at the upcoming AMAs, at which she is set to receive the artist of the decade award.

Swift also announced that Netflix had for the past three years been making a documentary about her life, before promptly throwing the project under a cloud. “This isn’t the way I had planned on telling you this news,” she wrote.

The battle over Swift’s music has been regularly erupting into the public sphere since the singer left music Big Machine Label Group – whose founder and chief executive, Borchetta, signed her as a 14-year-old and with whom she had recorded six albums – for Universal Music Group in November 2018. The UMG deal gave her ownership of her master recordings at that label – something she did not have at BMLG.

In June Borchetta sold BMLG, and along with it Swift’s masters, to Braun, who manages Justin Bieber and Kanye West, and who Swift claimed was responsible for years of “incessant, manipulative bullying” of her.

As a way of reclaiming some control over her music, Swift said in August that she planned to record copycat versions of her back catalogue from November next year.

In the note posted to Twitter, Swift said she had been planning to perform a medley of her hits at the AMAs, which will be broadcast on US television.

But the singer also alleged she had been told by Braun and Borchetta that she was “not allowed to perform my old songs on television because that would be re-recording my music before I’m allowed to next year”.

The pair had also thrown a spanner in the works of the Netflix documentary by declining the use of her older music or performance footage for the project, “even though there is no mention of either of them or Big Machine Records anywhere in the film”, Swift said.

She claimed that Borchetta would allow their use of the assets if Swift agreed to not re-record her songs in 2020 and remained silent on the topic of himself and Braun.

BMLG has been reported to mak up to 80% of its revenue from Swift’s music.

“The message being sent to me is very clear,” Swift wrote. “Basically, be a good little girl and shut up. Or you’ll be punished. This is WRONG …

“Right now, my performance at the AMA’s, the Netflix documentary and any other recorded events I am planning to play until November 2020 are a question mark. I’ve tried to work this out privately through my team but have not been able to resolve anything.”

She appealed to her fan base, which is extensive and passionate, to “let Scott Borchetta and Scooter Braun know how you feel about this”.

She also indirectly appealed to other artists managed by Braun, saying she hoped that “maybe they can talk some sense into the men who are exercising tyrannical control over someone who just wants to play the music she wrote”.

“I feel very strongly that sharing what is happening to me could change the awareness level for other artists and potentially help them avoid a similar fate,” Swift wrote.

“I just want to perform MY OWN music. That’s it.”

Neither Braun nor Borchetta had responded to the claims at the time of publication.