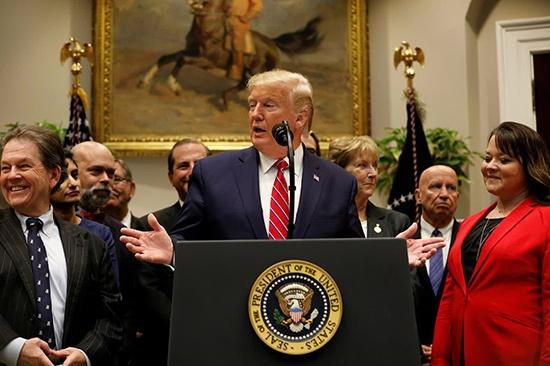 WASHINGTON (Reuters) – President Donald Trump on Friday asked the U.S. Supreme Court to block a lower court ruling directing an accounting firm to hand over his financial records to a Democratic-led congressional panel, setting up a major clash between branches of government.

Trump turned to the justices after the U.S. Court of Appeals for the District of Columbia Circuit decided on Wednesday that it would not revisit its October decision backing the House of Representatives Oversight Committee’s authority to subpoena the records from Mazars LLP, Trump’s longtime accounting firm.

In a separate case, Trump on Thursday asked the Supreme Court to review a New York-based federal appeals court’s ruling that local prosecutors can enforce a subpoena also issued to Mazars demanding Trump’s personal and corporate tax returns from 2011 to 2018.

The Republican president’s lawyers have called the Oversight Committee’s subpoena to Mazars illegitimate.

The lower court ruling, if left intact, would bring House Democrats closer to shedding light on the inner workings of Trump’s business interests even as they pursue an impeachment inquiry against him focusing on his dealings with Ukraine.

The case represents an important showdown at the top U.S. court over the powers of the presidency versus those of Congress.

“For the first time in our nation’s history, Congress has subpoenaed the personal records of a sitting president from before he was in office,” said Jay Sekulow, one of Trump’s lawyers.

“And, for the first time in our nation’s history, a court upheld a congressional subpoena to the president for his personal papers. Those decisions are wrong and should be reversed,” Sekulow added.

Trump’s lawyers said in court papers that if the court ruling is allowed to remain intact, it would give Congress broad authority to “dig up dirt on political rivals.”

“It has now been seven months since the Oversight Committee asked for these records. It is time for the president to let us do our job and stop blocking Mazars from complying with the committee’s lawful subpoena,” said Democratic Representative Carolyn Maloney, the acting chairwoman of the committee.

The committee said it needs to records from Mazars to determine if Trump complied with laws requiring disclosure of his assets, and to assess whether those laws needed to be changed.

It is not clear exactly what records were subpoenaed but, according to Trump’s lawyers, the panel did not specifically ask for Trump’s tax returns.

The court has a 5-4 conservative majority that includes two Trump appointees: Neil Gorsuch and Brett Kavanaugh.

Both Trump cases are likely to be on a fast track, meaning that if the court decides to hear them, a ruling would be possible before the end of June, when its current term ends.

The court must decide whether to grant Trump’s emergency application in the congressional subpoena case. If it refuses, the documents would have to be handed over to lawmakers. Five votes among the justices are needed to grant a stay request.

The House subpoena case is a test of how far Congress can go in investigating Trump and his business affairs.

If the Supreme Court ultimately rules in the case, it could set a major new precedent on the ability of Congress to investigate a sitting president. Similarly, in the New York case, Trump’s lawyers have made a broad argument in favor of complete presidential immunity from criminal investigations – even if the president shoots another person – while in office.

In 2016, Trump broke with a decades-old convention of presidential candidates releasing their tax returns. He has kept them secret since taking office.

Trump sued the House committee in April, arguing that its subpoena exceeded congressional investigative powers. A judge ruled against Trump in May, saying the documents might assist Congress in passing laws and performing other core functions.