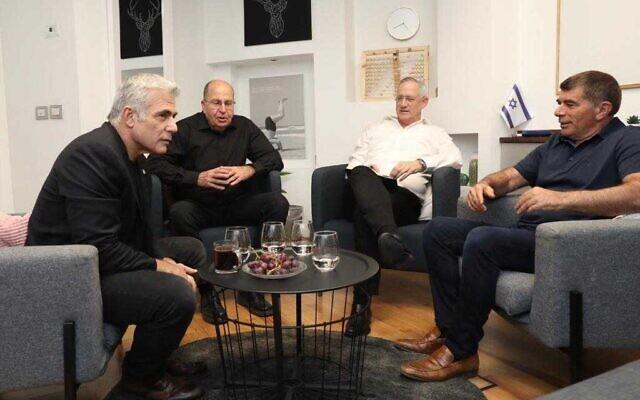 Blue and White party leaders are pessimistic that chairman Benny Gantz will be able to put together a coalition before his deadline expires Wednesday and believe Israel is heading to a third election in less than a year.

Following a meeting of the party leadership late Sunday, Blue and White sources told the Haaretz daily that the chances Gantz can convince Yisrael Beytenu chairman Avigdor Liberman to support a minority government are slim, and a unity government with Prime Minister Benjamin Netanayhu’s Likud is even less likely.

However, the two unnamed officials said Gantz would keep trying.

“After the leadership meeting there is nothing really new,” one of the officials told Haaretz. “If Liberman won’t vote for a minority government, we won’t be able to have one. At the moment it seems that he does not support one, but we will keep trying until the last minute.”

Earlier Sunday Liberman warned that a minority government would be a “disaster” for Israel, and asserted that a broad unity government was the only path forward to forestall a third election.

Speaking at an event in Tel Aviv, Liberman asserted that “the next 48 hours will be critical to know whether there is a government committed to preventing further elections” and that a minority government under the leadership of either Netanyahu or Gantz would struggle to pass legislation and would be unacceptably hobbled.

“It is impossible to deal with a minority government,” he said.

Gantz, who was given the mandate to form a government after Netanyahu failed to do so in the wake of the September elections, has until Wednesday to cobble together a coalition. After that, Knesset members may choose a candidate to be given the mandate or decide to head back to elections.

Gantz has no realistic path to forming a majority coalition without Likud, though he could presumably form a minority government with the external backing of the predominantly Arab Joint List.

Likud, meanwhile, has refused to abandon its 55-MK bloc of right-wing and religious allies who have pledged to only enter a government together — a position rejected by Blue and White. And Gantz has refused to join a coalition under a prime minister facing criminal charges, while Netanyahu is expected to be indicted by next week.

Meanwhile, the Ynet news site reported that if Israel goes to a third vote it would likely delay Netanyahu’s legal reckoning by at least six months.

Attorney General Avichai Mandelblit is expected to announce indictments against Netanyahu next Sunday or Monday.

However, once the indictment is filed Knesset members have 30 days to request that Netanyahu be given parliamentary immunity. However, Ynet reported, the Knesset committee that can decide on this can only be convened once there is a new government.

If third elections are called this would be at least six months.

Netanyahu denies all wrongdoing and has frequently claimed that the investigations against him are a witch hunt and a conspiracy orchestrated by the media, the left, police and the state prosecution.

Liberman’s comments came after Netanyahu addressed an “emergency meeting” of supporters in Tel Aviv and warned against the establishment of a minority Blue and White-led government backed by by the Joint List, stating that such a coalition “will be celebrated in Tehran, Ramallah, in Gaza, just as they celebrate every terror attack.

“But this will be a national historic terror attack on the State of Israel,” Netanyahu said.

Netanyahu claimed that during the flareup between Israel and Palestinian Islamic Jihad in Gaza last week, Gantz held coalition talks “with those same MKs who support terror organizations and want to destroy the country.” He added that while he did not want further elections, a Joint-List backed government would be worse because it would be an “existential threat” to Israel.

Earlier on Sunday, Liberman and Netanyahu met for talks aimed at building a unity government, with the hour-long conversation described by both sides as “positive.”

Commenting on Sunday’s negotiating session with Netanyahu, Liberman said that the two had held a “substantive meeting” and that “everyone understands that it would be absolute madness to take the country to a third round of elections.”

“I hope we can announce by midnight Wednesday that we have a broad unity government,” he added.

Earlier Sunday, negotiators from Blue and White and Yisrael Beytenu reported “real progress” in coalition talks, specifically on religion and state issues, three days before the deadline to form a government.

In a joint statement, the two parties said “real progress has been made in drafting the basic policy principles, in particular on matters of religion and state.”

The parties said their representatives would meet again on Monday and Tuesday.

Liberman, a right-wing secularist, campaigned on forcing a unity government between Likud and Gantz’s Blue and White that does not include ultra-Orthodox or “messianist” parties, if neither could form a government without him after the September 17 vote.

In a dramatic falling out with the Likud leader, Liberman precipitated the September vote by refusing to join Netanyahu’s coalition following the April elections, when he clashed with ultra-Orthodox parties over legislation to regulate military service for Haredi men.