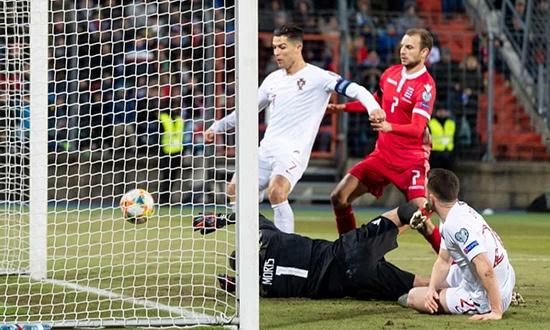 The defending European champions Portugal edged past Luxembourg 2-0 away from home on Sunday to qualify for Euro 2020.

Bruno Fernandes broke the deadlock in the 39th minute and Cristiano Ronaldo added the second with four minutes remaining to ensure that Portugal finished second in Group B with 17 points, three ahead of Serbia who drew 2-2 with Ukraine.

Ronaldo’s goal took his international tally to 99, leaving him on the brink of becoming only the second player in history to score 100 goals for a national team, joining Ali Daei of Iran. The Juventus forward later complained about the quality of the playing surface at the Josy Barthel stadium.

A stoppage-time equaliser by the late substitute Artem Besyedin gave Ukraine their draw in Serbia after the home side led twice in an entertaining qualifier.

The Ukrainians, who had already secured a place in next year’s 24-nation tournament, finished their campaign top of the group on 20 points from eight games. Third-placed Serbia, who collected 14 points, will have another chance to advance via the Nations League play-offs in March.

Matthias Ginter was delighted to register his first international goal as Germany booked their place at Euro 2020.

The Borussia Mönchengladbach centre-back opened the scoring in the 41st minute with an exquisite backheeled flick from Serge Gnabry’s low cross on his home ground.

Leon Goretzka doubled Germany’s advantage before a brace from Toni Kroos wrapped up a routine 4-0 victory against Belarus to move top of Group C.

Northern Ireland’s failure to win at home against the Netherlands meant the three points were enough for Joachim Low’s side to progress to next summer’s tournament, alongside their Dutch counterparts.

Speaking to the German Football Association’s official website, Ginter said: “Our main aim was to qualify for the Euros. We’re pleased to be part of such a big tournament. I’m really happy about my first goal. It’s great that I got it here in Monchengladbach too. They often left us a lot of space.”

Antoine Griezmann scored one and created another as France secured top spot in their qualifying group with a 2-0 win in Albania. The Barcelona forward set up the opener for Corentin Tolisso after eight minutes and followed up with the second just after the half-hour in Albania’s first match at the new Arena Kombetare.

It was the perfect way for the world champions to celebrate Didier Deschamps’ 100th match as manager of France, who were already qualified, and ensured they finished two points ahead of Turkey in Group H.