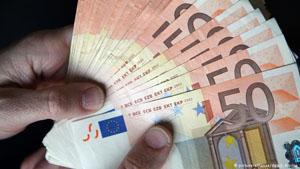 LONDON (Reuters) – The euro enjoyed a small respite on Monday, jumping to an 11-day high versus the U.S. dollar, on expectations that Washington and Beijing can soon sign off on a deal to end a trade war that has been a drag on global economic growth.

Faint optimism for a breakthrough was supported by a report on Sunday from Chinese state news wire Xinhua, which said the two sides had “constructive talks” over the weekend.

The export-oriented European economy has suffered from the 16 month long trade dispute between the world’s two largest economies. The tariff war has taken a toll on the world’s manufacturing.

“Market participants remain optimistic that a partial U.S.-China trade deal will be signed soon and have welcomed tentative signs of economic improvement outside of the U.S., especially in the euro zone, both of which are eroding the relative appeal of the U.S. dollar,” said Lee Hardman, currency analyst at MUFG.

The offshore Chinese yuan, however, remained below 7 per dollar, last falling 0.1% to 7.0142. The yuan is the most sensitive currency to the trade dispute.

“USD/CNY above 7.0 suggests that the market is not yet convinced a solution is near,” said Marshall Gittler Chief Strategist at FX analysis firm ACLS Global.

Sterling was boosted by expectations that the Conservative Party could win a majority in the Dec. 12 election, as well as by British Prime Minister Boris Johnson saying that all Tory candidates in the election have pledged to back his Brexit deal. This could open the door to getting the Brexit deal agreement passed through parliament.

Johnson’s Conservatives have a 14 point lead over the opposition Labour Party, a poll published by Good Morning Britain showed on Monday.

“Anyone firmly believing in a Tory victory can expect further potential in sterling,” said Commerzbank analysts in a note to clients, though they added that “the FX market is still quite sceptical” towards a Tory win.